Fujifilm has unveiled the X100V; the fifth in its series of X100 rangefinder-style cameras with improved features. So here is a Fujifilm X100V vs X100F vs X100T vs X100S vs X100 comparison that shows the highlights to help you for decision.

We are sure that only the X100F specs comparison will suffice for existing Fuji users. But we thought that for all users who are curious about Fuji’s latest premium digital compact camera, let’s put together the features of all the members of the series side by side.

At the core of the camera, the AF system has been revamped. The number of focusing points has been dramatically expanded from 49 in previous models to 91 (up to 425 points). Other key improvements offered by the X100V include a new tilting rear touchscreen LCD monitor, updated Advanced Hybrid Viewfinder, weather-proofing, the latest generation X-Processor 4, and 10-bit, 4:2:2 4K video up to 30fps and 1080p up to 120fps. 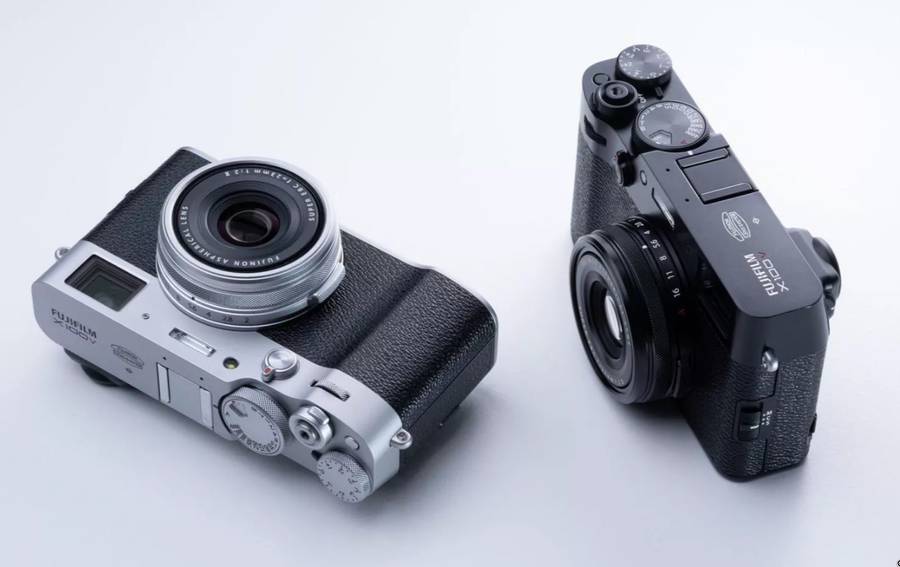 Below is a comprehensive table, showing each iteration of the Fuji X100 cameras, along with their key specifications.

The X100V inherits the same basic sensor and processor combination we see on the X-T3 and X-Pro3 interchangeable-lens cameras. So you get 26MP of resolution from a BSI-CMOS sensor with Fuji’s X-Trans color filter array. You also get a new lower native ISO value of 160, though the native maximum remains 12800.

The new sensor brings with it a new on-sensor phase detection autofocus system (also borrowed from the X-Pro3), which has 425 AF points that are spread across almost the entire frame (up from 325 points on the X100F). Tracking autofocus is responsive, performing similarly to Fujifilm’s interchangeable-lens flagship models.

At first glance, the 23mm F2 lens on the X100V looks identical to its predecessors’. It has, in fact, been completely redesigned to offer better performance when using wide-apertures close-up, as well as generally better corner performance.

Fujifilm says that the viewfinder on the X100V is essentially the same as that on the X-Pro3. It’s still a hybrid optical-and-electronic unit, it’s bigger than the older viewfinder and now has an OLED panel. This means that the information overlay in the optical mode can be brighter for easier viewing in bright light, but also that when you use the viewfinder in electronic mode, you get much better contrast than with the older LCD panel.

The X100V’s rear screen is touch-sensitive and a tilting design. This allows for you to place your AF point with you finger, drag your finger on the screen to place the AF point when your eye is to the finder, and utilize Fujifilm’s swiping touch-functions, first seen on the X-E3.

The X100V comes with the most complete video feature set you’ll find on any camera of its type. You get 4K/30p internal recording at up to 200Mbps, with an option for F-log recording which is 8-bit only. The camera comes with the Eterna film simulation profile.