Panasonic AG-DVX200 4K video recording MFT camcorder offers top-end features such as 4K/60p recording, a 13X optical zoom and a V-Log L gamma curve (12 stops of latitude, target) and delivering a shallow depth of field and a wide field of view. The DVX200 is the ideal companion camera to the company’s groundbreaking VariCam 35 4K camera/recorder.

The DVX200 will be optimized for 4K/HD production and shares the esteemed VariCam family characteristics of filmic tonality and colorimetry, with natural, subtle rendering of skin flesh tones. The camcorder will be available in Fall 2015 with a suggested list price under $5000.

At NAB 2015, it was announced that the award winning Lumix GH-4 will have firmware update (Ver.2.2) available later this month, enabling recording anamorphic video content. 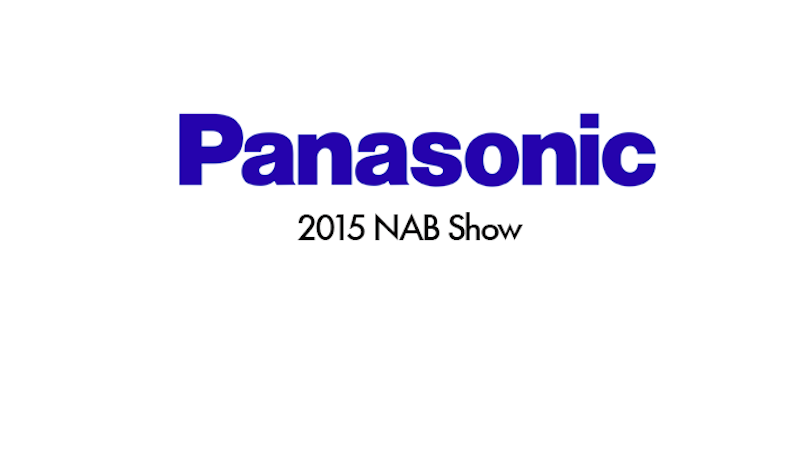 Offering many top-end features such 4K/60p recording, a 13X optical zoom and a V-Log L gamma curve (12 stops of latitude, target) and delivering a shallow depth of field and a wide field of view, the DVX200 is the ideal companion camera to the company’s groundbreaking VariCam 35 4K camera/recorder.

The DVX200 will be optimized for 4K/HD production and shares the esteemed VariCam family characteristics of filmic tonality and colorimetry, with natural, subtle rendering of skin flesh tones. It will offer a V-Log curve emulating the natural grey-scale rendition of the VariCam 35. The camcorder will be available in Fall 2015 with a suggested list price under $5000.

The company is previewing the AK-UB300 4K multi-purpose camera for remote studio, weather and traffic reporting, image magnification and sports implementations. The UB300 is equipped with a one-inch MOS sensor that outputs a UHD signal up to 3840×2160/59.94p, with the ability to simultaneously output HD (up to 1080/59.94p).

Also shown for the first time is the AK-UC3000 4K-ready studio system, targeted at studios and productions requiring high-end functionality at an affordable price. The UC3000 outputs a UHD signal up to 3840/2160/60p, while also delivering superior picture quality in HD. The camera’s B4 mount accommodates the gamut of existing 2/3-inch lenses to maximize customers’ return on investment in existing lenses, and allows a wider and more economical choice of glass for sports, concerts and similar applications.

At NAB, it was announced that the award winning LUMIX GH4 will have firmware update (Ver.2.2) available later this month, enabling recording anamorphic video content. Unlike complex digital post processing needed to achieve the classic Hollywood look, many effects that have became so popular with anamorphic film capture can now be achieved optically in the LUMIX GH4.

Cox Media Group (CMG) has launched a group-wide upgrade of ENG with three of Panasonic’s AVC-ULTRA camcorders, the AJ-PX5000G, AJ-PX800 and AJ-PX270. CMG’s operations encompass 14 broadcast television stations and one local cable channel: the new camcorders are being implemented on timetable extending from 1Q 2015 through 1Q 2016. Ultimately, Cox Media will standardize on AVC-LongG25 acquisition.

Panasonic is introducing P2 Cast, a cloud-based news production system that leverages the network features of the AJ-PX5000G, AJ-PX800 and AJ-PX270, integrating these camcorders’ network capabilities so content uploaded to the cloud is immediately available for reviewing and editing.

Newsroom systems can automatically pull back high-resolution video for air from the camera in the field; the video can range in quality from AVC-LongG12 through AVC-Intra Class100, depending on preference and available bandwidth. P2 Cast has been tested for the past several months by major international and domestic broadcasters (including Time Warner Cable NY1 News), and is immediately available in the United States and Europe on a free trial basis through September 2015.

On a related front, Panasonic is expanding its strategic collaboration with LiveU with a free firmware upgrade for AVC-ULTRA camcorders. The upgrade enables an integrated camera and live video uplink solution leveraging the LiveU Central cloud-based management platform so that camera operators can manage a live uplink while shooting video, essential for a one-person remote crew.

Building on the widespread success of the AK-HC3800 studio model, the company will introduce the high resolution AK-HC5000 studio camera, capable of high-speed output up to 200fps. The camera incorporates new 2/3” 2.2M 3-CMOS sensors with high sensitivity and low noise, and is 1080/60p native, making it ideal for sports trucks, and staging/rental applications where 1080i/720p operations must be native and clean.

Panasonic is premiering the AJ-PX380 1/3-inch AVC-ULTRA shoulder-mount camcorder with comprehensive networking capabilities and dual-codec recording, making it an optimal tool for fast-moving ENG operations. The PX380 joins the latest series of Panasonic’s AVC-ULTRA camcorders with built-in wireless/wired streaming capabilities, and will be available in September 2015 with a suggested list price under $12,000, including supplied lens and viewfinder.

Panasonic is debuting the A1, its latest wearable POV Action-cam, weighing a mere 1.6 ounces. The camera’s rugged structure keeps water and dust out, making it an ideal choice for any adventure thanks to its high durability. The A1 also shoots in total darkness with an IR light source.

Panasonic will showcase the latest Toughpad and Toughbook enterprise-grade mobile computers, offering power, connectivity and long-term reliability for professional video applications. This includes the next generation of the Toughpad 4K, the world’s first 20-inch tablet with a 4K resolution display. Now featuring a 5th Generation Intel® Core™ i5 vPro™ processor, as well as HDMI 2.0 input – and priced within reach of a greater range of businesses – the updated Toughpad 4K standard edition will be available in July 2015. Panasonic will also showcase the recently launched Toughbook 54, the thinnest and lightest 14″ semi-rugged Windows notebook in its class. Available with an Intel® Core™ i7 processor, AMD FirePro™ M5100 discrete graphics, and a 1080p Full HD display, the Toughbook 54 features a full magnesium alloy drop-resistant design with built-in handle and spill-resistant keyboard.

NAB is likewise a showcase for Panasonic’s leading AV Technologies solutions, including the new PT-RZ12KU 12,000 lumens WUXGA laser projector, which boasts 120 Hz frame-replacement technologies and is compatible with high frame rate contents, reducing blur from motion and featuring a contrast ratio of 20,000:1. The new PT-DZ780 Series projector will also be on display, where attendees can take note of its extremely quiet fan and outstanding color reproduction. The booth will also highlight Panasonic’s 4K LED backlit LCD displays (including the 98” TH-98LQ70 and 84” TH-84LQ70) in addition that a video wall that leverages an ultra-narrow 0.14” (3.5mm) bezel and 700cd/m² brightness through the 55” TH-55LFV70. The LED Video Wall Display creates nearly seamless, vivid images across multiple displays for broadcast studio application.