Atomos and Olympus teamed up and announced the development with of RAW recording over HDMI with the E-M1X and E-M1 Mark III mirrorless cameras via Ninja V Free Firmware Update. Together these powerful Olympus cameras and the Atomos Ninja V will record Apple ProRes RAW directly from the camera’s sensor. The firmware is scheduled for release in winter 2020.

Atomos has enabled 4Kp60 ProRes RAW over HDMI for the latest cameras when recording to an Atomos Ninja V recorder, including the Sony a7S III, Sigma fp, Fujifilm GFX100 and many others.  This format allows filmmakers with more latitude when editing video files, giving them the ability to extend brightness and shadow detail – just as a RAW image file does the same for photographers. 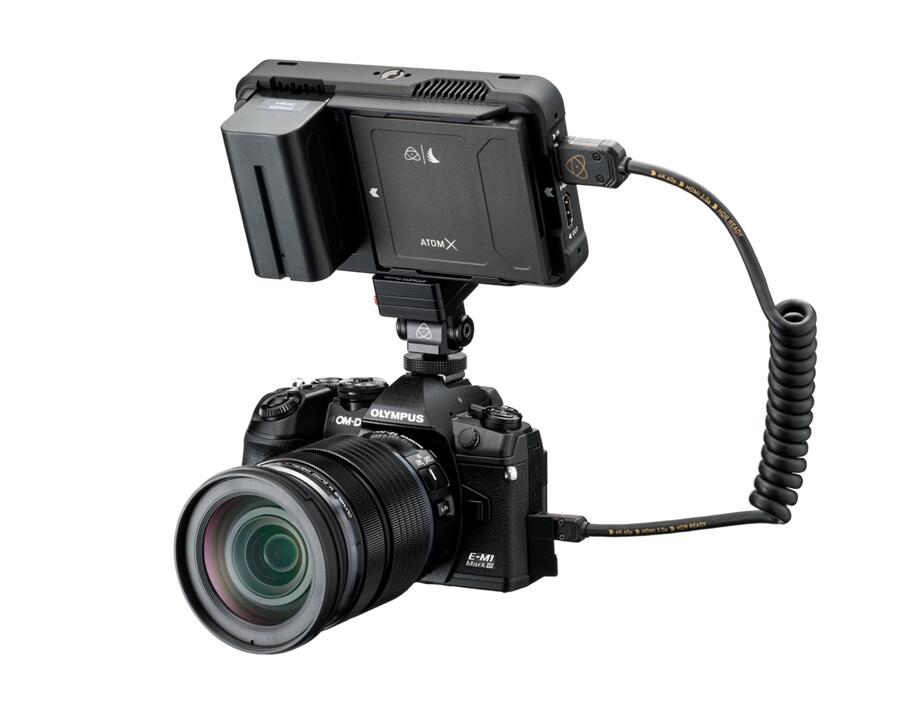 September 15, Melbourne, Australia: Atomos is excited to announce co-development with Olympus of RAW recording over HDMI with the OM-D E-M1X and Olympus OM-D E-M1 Mark III mirrorless cameras. Together these powerful Olympus cameras and the Atomos Ninja V will record Apple ProRes RAW directly from the camera’s sensor.

Olympus users who love the OM-D family for its portability and in-body 5-axis image stabilization will get all the benefits of a ProRes RAW workflow – creative control to adjust the color and look of the video in post-production while extending brightness and shadow detail.

The Ninja V allows users to accurately monitor the RAW signal on its daylight-viewable 5” 1000nit brightness HDR screen. Setup is simple with perfectly tuned color settings applied automatically. Users can then view the image in HDR quality with a choice of HLG and PQ (HDR10) formats. The Ninja V offers touchscreen access to tools like waveforms, 1-1 magnification and focus peaking, allowing users to perfect their shot setup. The Ninja V then records the ProRes RAW data onto a removable AtomX SSDmini or other SSD drive. When shooting is complete the drive is removed and connected to a computer via USB for immediate offload and editing.

Jeromy Young, Atomos CEO, said: “We’re thrilled to work with Olympus and their stunning mirrorless cameras to bring the power of Apple’s ProRes RAW to OM-D users. We can’t wait to see the creativity that results from this partnership”.

ProRes RAW is now firmly established as the new standard for RAW video capture, with Olympus being the eighth brand to support the format with the OM-D E-M1X and OM-D E-M1 Mark III mirrorless cameras. ProRes RAW combines the visual and workflow benefits of RAW video with the incredible real-time performance of ProRes. The format gives filmmakers enormous latitude when adjusting the look of their images and extending brightness and shadow detail, making it ideal for HDR workflows. Both ProRes RAW, and the higher bandwidth, less compressed ProRes RAW HQ are supported. Manageable file sizes speed up and simplify file transfer, media management, and archiving. ProRes RAW is fully supported in Final Cut Pro X and Adobe Premiere Pro along with a collection of other apps including ASSIMILATE SCRATCH, Colorfront, FilmLight Baselight and Grass Valley Edius.

The firmware update to enable these features is scheduled for winter 2020.