The enclosure of the lens is made of metal to strengthen its durability. The lens has a wide magnification range (from 1X to 5X) allowing photographers to capture subjects at different sizes. Users no longer need to DIY or use any extension tubes to reach high magnification shooting. The lens is also designed to have one of the longest working distance for ANY super macro lens. The closest working distance at 5x magnification is 3.93” (10cm) and 10.7” (27.2cm) at 1x magnification. This working distance is so much longer than traditional macro lenses in the market. Photographers can now start shooting macro objects without getting too close and scare them away. The extended working distance also implies lighting can get to the subjects easier. It is also more friendly to use on video shooting. This new super macro lens also has a near telecentric performance which is a big advantage when it comes to macro image stacking photography or industrial usage. 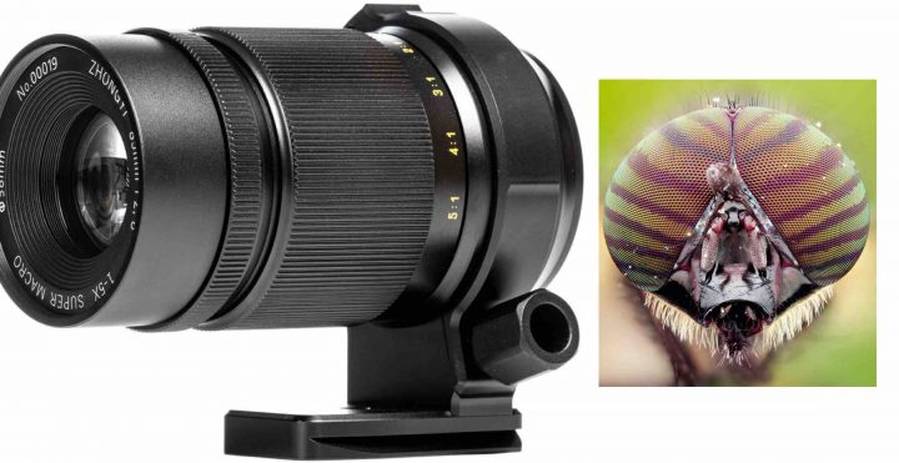 The new 1x-5x Super Macro lens incorporates a 12 elements in 8 groups structure which delivers impressive resolution from corners to corners. The chromatic aberration is also controlled to the minimum (APO design). Weighing merely 1.65 lbs (750g) and 6.7cm long, it is a perfect companion for both wildlife or indoor lab shooting. It is relatively compact in its class which allows photographers to capture extremely fine subjects or patterns with different sizes. Greater magnification can also be achieved by stacking extension tubes or bellows. The high magnification is extremely useful for scientific purposes. The lens can only be used in macro distances and cannot focus to infinity. A 58mm filter thread is also available.