The flagship OM-D E-M1 Mark II has received two prestigious Camera Grand Prix 2017 awards, “Camera of the Year” and “Readers Award”. In addition, the M.Zuiko Digital ED 12-100mm f/4.0 IS PRO was selected for the “Lens of the Year” award.

The Camera Grand Prix considered one of the widely recognized camera and lens award in Japan, is sponsored by the Camera Press Club, and is managed by the Camera Grand Prix Committee. The “Camera of the Year” and “Lens of the Year” awards are presented to the best still camera and the best lens introduced in the Japanese market within the past year. The “Readers Award” was selected by general readers’ votes. 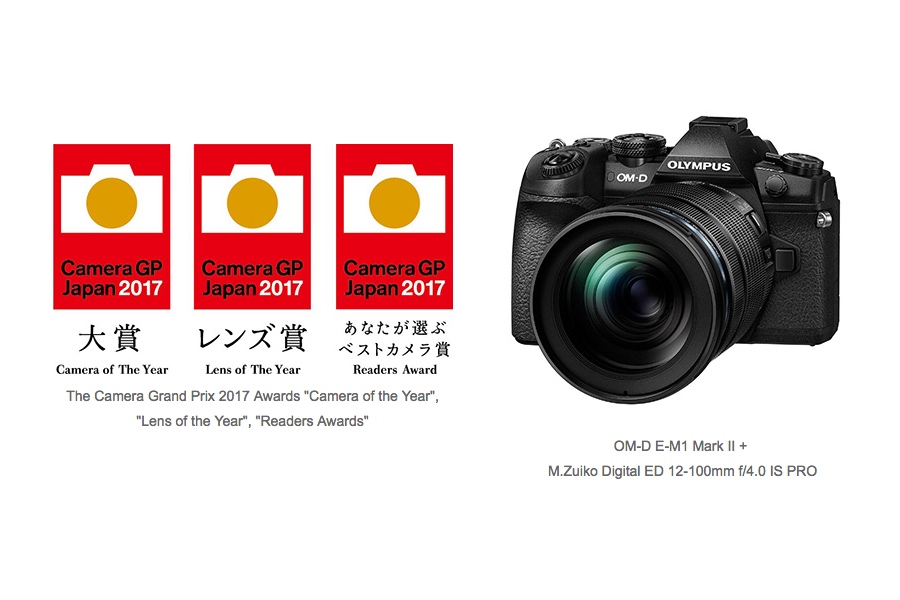 “As three years passed since OLYMPUS OM-D E-M1, a Camera Grand Prix 2014 Editors Award winner, was first launched in 2013, this new flagship model OM-D E-M1 Mark II has marked another development and further expanded the concept of the mirrorless camera. It shows us an exciting future vision. Its sequential shooting performance exceeds that of single-lens reflex cameras, with the maximum fps at 18 in continuous AF/AE tracking and even 60 fps in single AF/AE on the silent sequential shooting mode. Its autofocus performance is such that you can readily capture even fast-moving subjects. It is amazing that its 5-axis in-body image stabilization system provides up to 6.5 shutter speed steps when paired with a compatible lens. The image quality and credibility are great enough for professionals and amateurs alike, with its good portability allowing them to use it quite casually. As the dust-proof and splash-proof body gives a comfortable grip, you can use it for a wide variety of photo opportunities.
In recognition of these features, we have selected OLYMPUS OM-D E-M1 Mark II for Camera Grand Prix 2017 Camera of the Year.”

A selection of comments from users

“Although classified as a high magnification zoom lens, its performance goes beyond what is expected for the class. It provides not only standard but also telephoto zooming, with its constant f4.0 aperture. This is quite an all-rounder you can rely on for every type of subjects and locations. It boasts superior resolution in all the zoom range with suppressed aberration. The image quality is so excellent that you might doubt it is really a zoom lens. When combined with OM-D E-M1 MarkII, the image stabilization goes up to surprising 6.5 shutter speed steps of compensation (based on CIPA standards), which enables your handheld shooting for 1 second or longer. You might say you don’t need a tripod anymore.

In recognition of these features, we have selected OLYMPUS M.ZUIKO DIGITAL ED 12-100mm F4.0 IS PRO for Camera Grand Prix 2017 Lens of the Year.”