Nikon has announced the new “I AM Generation Image” campaign, which is the imaging leader’s new platform to amplify the voices of individuals who want to stand out in a world of visual noise.

The concept of “Generation Image” was born from a desire to understand people’s relationships with their images. “I AM Generation Image” will include inspiring content and encourage others to share their own passions through authentic imagery.

See the two Youtube ads below with the following press text from the company.

I Am Generation Image

See Through the Eyes of this Generation

Nikon Inc. Announces New ‘I AM Generation Image’ Integrated Campaign to Celebrate and Support a World that Communicates Visually 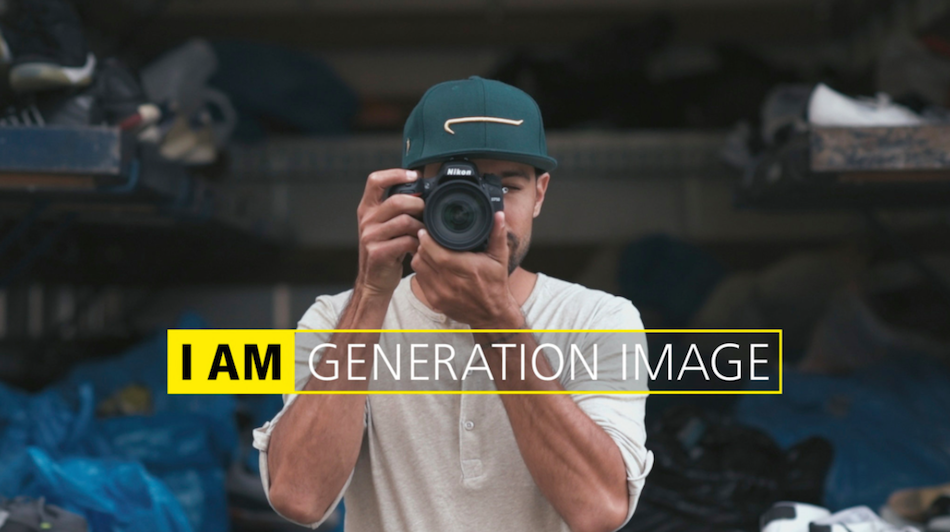 MELVILLE, NY – Today, Nikon Inc. has announced its new “I AM Generation Image” integrated campaign, which is the imaging leader’s new platform to amplify the voices of individuals who want to stand out in a world of visual noise. The brand campaign aims to reinforce confidence in the entry-level and enthusiast DSLR markets, and inspire people to create images far beyond just “good enough,” to have their stories heard. “I AM Generation Image” will officially start today, with the launch of an immersive website featuring the content of a select group of creative individuals representing some of the eyes and voices of this generation.

“Each day we upload tens of thousands of images, making us the first generation to truly embrace pervasive visual communication. Whether it’s love, laughter or a call to act for the greater good, the feeling you get when you look at a photo or watch a video should reflect the intent and emotions of the person behind the lens,” said Lisa Baxt, Associate General Manager of Communications, Nikon Inc. “Generation Image was created to answer this need, and celebrates the stories of our lives and the important role that imagery plays in telling them, while inspiring users to capture more, and capture better using Nikon.”

Defining “I AM Generation Image”

The concept of “Generation Image” was born from a desire to understand people’s relationships with their images. After extensive research, it became clear that the number of images captured and shared every day is significantly increasing, and that quality is critical to celebrate and purposefully represent the motivations of this new generation of image makers. Across the country, people are using their cameras as a tool to share what is important to them and each have the potential for significant impact. From families or hobbies, personal causes to accomplishments, this new segment of creative individuals enjoys expressing and sharing what they are passionate about through photos and videos. On social media channels, the hashtag #IAMGenerationImage is a rallying cry. It echoes the desire to deliver the best images possible, in order to convey emotions and passions that rise above the noise.

“I AM Generation Image” reminds us that we are all part of this generation, and Nikon will enable our stories to ring loud, true and authentic. The campaign will help to define this generation as the first to overwhelmingly express themselves through images en masse and on a global scale. The successful “I AM” international campaign has acted as a worldwide catalyst for millions of fans to self-identify with the Nikon brand. The new campaign builds upon the “I AM” architecture to make imaging a personal experience for North America.

In North America, the campaign begins today in the United States with an experience site that features content from a select group of extraordinary individuals who document their own passions through imagery. This group of visual storytellers will capture content that will be seen through an immersive experiential website that acts as a portal, offering a glimpse into their fascinating worlds. These individuals are a diverse group of personalities who are not professional photographers; they represent a wide range of stories from entrepreneurs, philanthropists, comedians and more. The online portal will also act as a hub for the campaign, offering followers a chance to become personally invested with the lives of this imaginative group as they share content in real-time. Formal participants in the campaign will share imagery under the hashtag “#IAMGenerationImage” and Nikon will encourage widespread consumer participation through its social channels.

The “I AM Generation Image” Campaign will be driven by non-traditional media, including video advertisements, digital media on relevant websites, rich media and social paid promotion.  Additionally, a series of videos defining the campaign will drive to the branded microsite. Consumers will see an immersive experience through rich media advertisements, and both mobile and desktop users will enjoy an interactive experience with high production values for video and sound. Users will also be encouraged to interact with the campaign by tagging their own visual stories with #IAmGenerationImage for the chance to be incorporated into the campaign. Advertisements will run through the end of 2014 and the Spring of 2015 to support the various aspects of the campaign.

The integrated campaign was created and will be executed by Nikon’s agency partners, McCann Erickson, ID Media, MRM / McCann, Initiative Media and MWW.