Leica X Vario Type 107 camera has listed on the front page of a German retailer site Audiophilfoto. The upcoming Leica camera which is also called as Leica Mini M is priced at €2450, around $3,200.

The US price of the Leica X Vario camera expected to be around $3000. The new Leica camera will be officially announced tomorrow (June 11) and should be available in Leica stores. Exclusive preview and test drive will be on 15 – 16 June, 2013.

Previously rumored specs list are the same on the retailers site for the upcoming Leica X Vario camera. 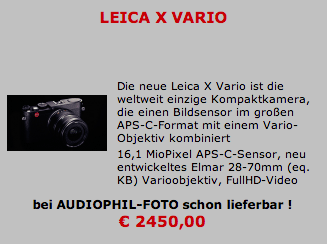