Laowa 0.7x Focal Reducer for the 24mm f/14 2X Macro Probe lens from Venus Optics is now officially announced. It is used to reduce the crop factor when using the lens on APS-C, Super35, or MFT cameras.

Venus Optics, the camera lens manufacturer specializing in making unique lenses for photographers and cinematographers, is thrilled to announce the new 0.7x Focal Reducer for 24mm f/14 2X Macro Probe. It reduces the crop factor when using probe lenses on APS-C/ Super35 and Micro Four Thirds cameras, which helps retain the perspective of the probe lens. The maximum aperture is boosted to f/10 as well. 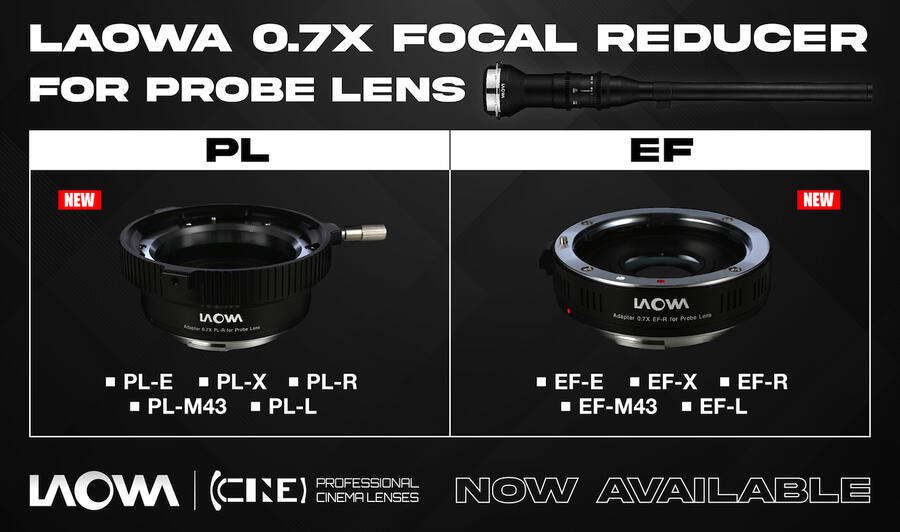 Keeping the perspective on S35 and M43
Optimized for Laowa 24mm f/14 2X Macro Probe, the 0.7x Focal Reducer effectively reduces the crop factor from 1.5x to 1.05x on Super35 and from 2x to 1.4x on Micro Four Thirds, which reserves the original perspective of the probe lens. It also boosts the aperture by 1 stop, making it a brighter lens with an f/10 maximum.

Excellent Durability
The focal reducer is fully constructed with metal. Not only provide stability for adapting lenses, but it also improves durability. It would be a reliable shooting gear for professional use.