RED V-RAPTOR ST 8K VV Cinema Camera is the latest flagship 8K cinema camera that can record REDCODE RAW video at up to 120fps. The $24,500 cinema camera, which features a Canon RF lens mount, is the first in RED’s new DSMC3 generation of cameras and manages to pack a lot of features in a relatively compact form factor. 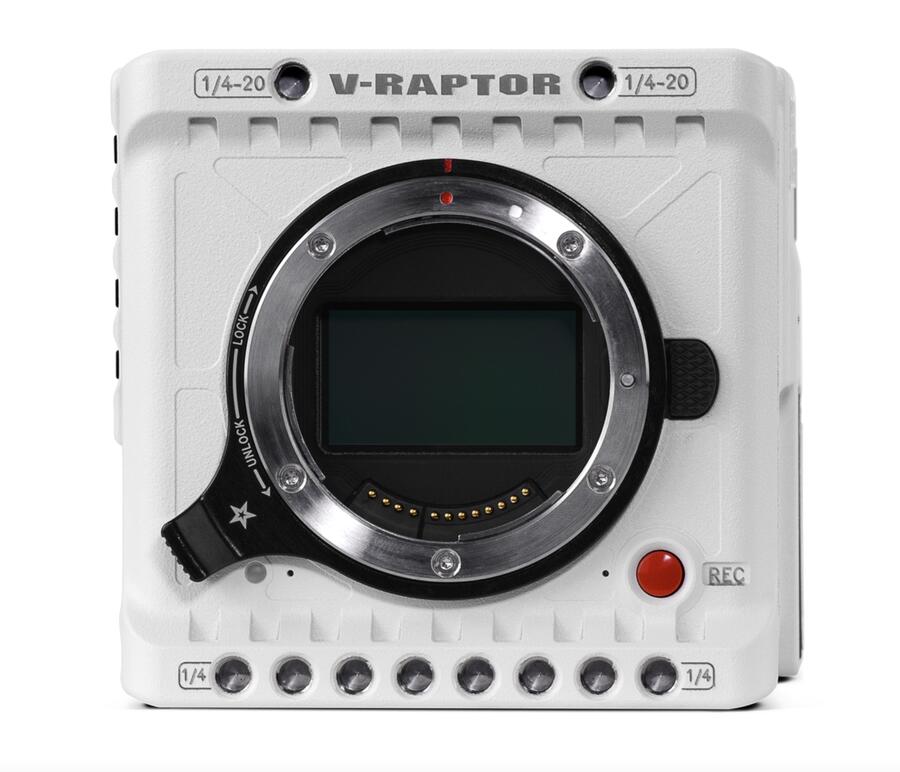 V-RAPTOR 8K VV is the most powerful and advanced RED cinema camera ever. As the brand’s new flagship system and sensor, as well as the first entrant into the new DSMC3 generation of cameras, V-RAPTOR stands alone at the forefront of the of digital image capture technology.

Featuring a groundbreaking multi-format 8K sensor- with the ability to shoot 8K large format or 6K S35, it unlocks the largest lens selection of any comparable camera on the market and allows shooters the ability to always deliver at over 4K. The sensor also boasts the highest recorded dynamic range and cleanest shadow performance of any RED camera. In addition, the V-RAPTOR sensor scan time is 2x faster than any previous RED camera and it allows users to capture up to 600 fps at 2K. V-RAPTOR will also continue to feature RED’s proprietary REDCODE RAW codec, allowing users to capture 16-bit RAW, and leverage RED’s latest IPP2 workflow and color management.

Along with a new flagship sensor, the V-RAPTOR features a modernized platform in an amazingly compact package weighing in at barely over 4 lbs. With 2 4K 12G-SDI outputs, XLR audio and phantom power via adapter, and 1080p livestream, this system can handle most anything a shooter can throw at it.

Compact, fast, and full-frame—the V-RAPTOR 8K VV is RED DIGITAL CINEMA’s impressive introduction to their new DSMC3 platform. Sized only slightly larger than the KOMODO but boasting a new sensor, the V-RAPTOR offers multi-format capture in 8K VistaVision, 6K Super35, 4K, 3K Super16, and anamorphic options. This versatility enables you to adapt your format from project to project to suit your choice of a variety of pro cine or still photo lenses. The V-RAPTOR’s RF lens mount can be used with numerous lens adapters, and it has a locking ring that provides additional security for use with heavier lenses and steady, wide-open capture. In response to user feedback, RED has added a right-side user interface that brings control to 1st and 2nd ACs right at the camera. Dual 12G-SDI outputs, resolutions including 16-bit REDCODE Raw at significantly higher frame rates, 1080 streaming, 17+ stops of dynamic range, and phase-detection autofocus (PDAF) further boost the V-RAPTOR’s suitability for a range of production styles.

The Read V-RAPTOR ST starts at $24,500 for the camera body only. And it comes with the V-RAPTOR ST Starter Pack, which is a pre-bundled setup that is perfect for owner-operators, run-and-gun style shooters, or anyone looking to take advantage of V-RAPTOR’s nimble and versatile form-factor. It includes:

More information can be found at RED Official Site.