Fujifilm has announced that nine of its products have been awarded the prestigious “red dot award: product design 2016.”

The Red Dot Design Award is an international product design award launched in 1955. It examines products released within the past two years, and they are judged in nine criteria including degree of innovation, functionality, ergonomics, ecological compatiblity and durability. It is among the world’s most prestigious design award, along with the “iF design award” in Germany and the “International Design Excellence Awards (IDEA)” in the United States of America. 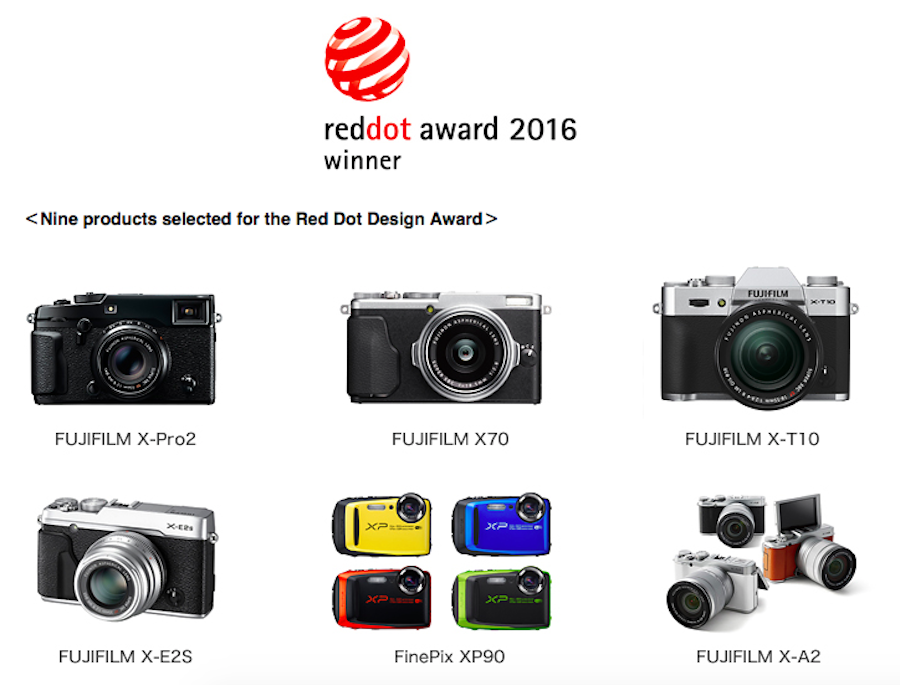 The X-Pro2 has a Hybrid AF system with 273 total points, of which 77 are phase-detect and cover 40% of the frame. The X-Pro2 is Fujifilm’s first X-mount camera with dual memory card slots, both of which take SD cards. More details can be found in the official announcement and additional coverage pages.

The X70 has a standard ISO range of 200-6400, which expands to 100-51200. It can shoot continuously at 8 frames per second, though only for ten photos. Naturally, it has the full set of Film Simulation Modes, save for the new ACROS mode on the X-Pro2. Video can be recorded at 1080/60p, with a maximum bitrate of 36Mbps. More details can be found in the official announcement page.

The Fujifilm XQ2 is a premium pocket-sized digital camera with a bright 4x zoom lens, a 12-megapixel 2/3” X-Trans CMOS II sensor with phase detection, and the EXR Processor II that delivers the fastest auto focus speed in its category.

There are also four X series mirrorless cameras the X-Pro2, X70, X-T10 and XQ2 has been awarded for the iF Design Award 2016.