Ricoh have updated their teaser and reconfirmed the launch date of their first Pentax full frame DSLR camera for Spring 2016.

According to the company, the much-awaited camera is “coming up in spring 2016.” They released a new product image which can be seen below.

According to latest Pentax rumors, the upcoming Pentax Full Frame DSLR camera could use the new 42.4-megapixel image sensor in the Sony A7RII mirrorless shooter. 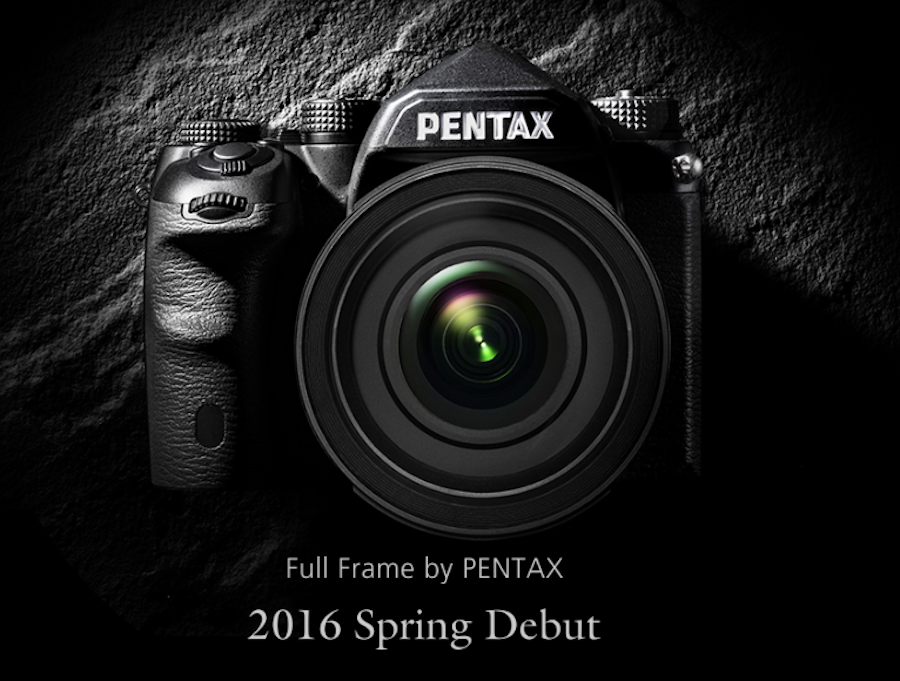 2015.11.30 PENTAX has always been a unique brand of camera. Never one to imitate other makes, PENTAX has stuck to its pursuit of original value to create high-performance cameras used and loved by pros and amateur photographers alike.

Let’s look back on the history of PENTAX, going back to its origins at Asahi Optical Co., Ltd. The company was established in 1919 as Asahi Kogaku Goshi Kaisha. It manufactured eyeglass lenses and cine lenses. In 1952, the company began camera production with its Asahiflex 1, the first single-lens reflex camera made in Japan. In 1954, this model evolved into Asahiflex IIB with a quick-return mirror. The Asahi Pentax AP, which came out in 1957, was the first camera to come equipped with a pentaprism — a five-side optical glass element — as well as a quick-return mirror. This was the first time the name PENTAX appeared. These models were followed by many other cameras — exclusively SLR — equipped with unique features that were the first of their kind, both in Japan and in the world. In 1964, the Asahi Pentax SP was the first SLR with TTL (through-the-lens) metering. Asahi Pentax ES, launched in 1971, was the first with TTL full-aperture metering and automatic exposure control.

Not all PENTAX cameras used 35 mm film. In 1967Ricoh have reconfirmed, the maker put out the first medium-format SLR with built-in TTL exposure metering that used 6 cm x 7 cm film. The camera was aptly named PENTAX 6 x 7. A medium-format camera using 6 cm x 4.5 cm film, the PENTAX 645 (1984). Not only did PENTAX mobilize the medium-size camera world with 35 mm cameras, but it also launched the first medium-format interchangeable AF lens camera, PENTAX 645NII (1997), achieving both high-quality pictures and mobility. The camera has been used and loved by photography lovers of all kinds.

As for digital SRL cameras, in 2003, PENTAX *istD was unveiled as the smallest and lightest weight camera in the world. PENTAX K100D (2006) was well-received as the first PENTAX digital SLR to have built-in image stabilization. The same year, PENTAX K10D was released. It had the same functions as K100D as well as the first dustproof and weatherproof structure, and achieving a reputation for overall excellence in an SLR camera. It received 3 major international camera awards: TIPA, Camera of the Year, and EISA. In the years that have followed, the maker has continued to release unique cameras, such as the digital SRL with the well-known medium-format 645 mount, PENTAX 645D.

PENTAX is launching a digital SLR with a brand-new format.

Reliability rooted in history and technology. Incomparable originality. These are all unique and attractive cameras that only PENTAX can offer. A new chapter in the PENTAX is about to begin!