Ricoh has announced the WG-40 and WG-40W waterproof compact cameras.

Ricoh WG-40 and WG-40W underwater camera models are designed to be waterproof to a depth of 14 meters, shockproof against falls from a height of 1.6 meters, and freeze-proof to temperatures as low as -10°C.

They also provide a range of features to facilitate all types of still-image and movie shooting, including approximately 16.0 effective megapixels and Full HD movie recording capability. The Ricoh WG-40 and WG-40W, which are being released only in Japan at the moment, are very much like the current Ricoh WG-30 and WG-30W models, but offer a new Mermaid mode that boosts contrast and reds when used underwater. 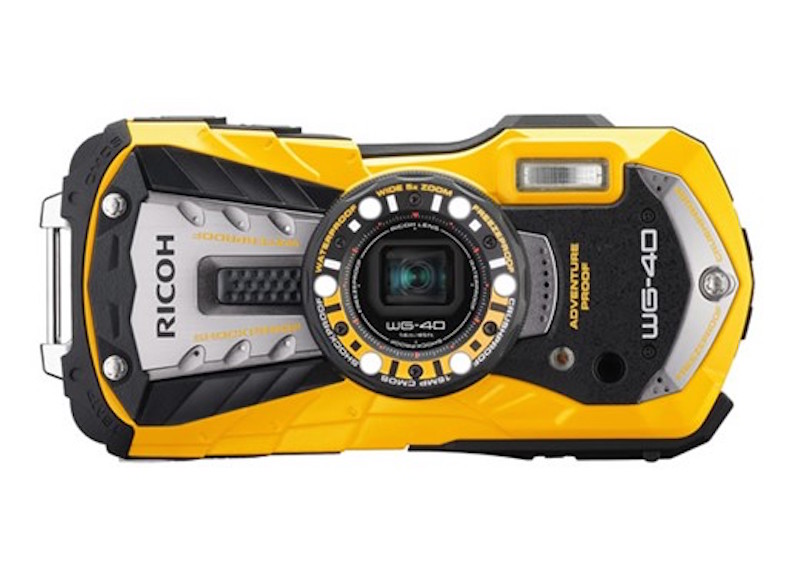 RICOH IMAGING COMPANY, LTD. is pleased to announce the launch of the RICOH WG-40 and WG-40W digital compact cameras. Despite their compact, lightweight body design, they assure exceptional waterproof and shockproof performance. The WG-40W is also equipped with a variety of Wi-Fi functions.

Developed as standard-class waterproof digital compact cameras, the RICOH WG-40 and WG-40W provide dependable operation and outstanding operability in demanding outdoor conditions that rival top-class models: they are designed to be waterproof to a depth of 14 meters, shockproof against falls from a height of 1.6 meters, and freeze-proof to temperatures as low as -10°C. They also provide a range of features to facilitate all types of still-image and movie shooting, including approximately 16.0 effective megapixels and Full HD (1920 x 1080 pixels) movie recording capability. In order to accommodate a wider range of scenes and subjects, they even come equipped with such advanced features as scene-specific white-balance optimization, a flash mode exclusive to the Mermaid shooting mode to capture beautiful underwater images, and the Vibrant and Reversal finishing touches that are popular with PENTAX digital SLR cameras.

The RICOH WG-40W comes equipped with a host of Wi-Fi functions. A smartphone can be used to release the camera’s shutter and set various functions from a distance, browse and download recorded images, and even share them with friends by uploading them to social networks and other websites.

In addition to the standard body colors of black and white, the WG-40 and WG-40W offer two other outdoor-themed color choices: brilliant yellow, and blue, which is treated with a special coating that changes hue depending on the angle at which they are seen.

1. Heavy-duty construction assuring underwater shooting down to 14 meters, for up to two hours

The solid, airtight body common to both the WG-40 and the WG-40W is not only waterproof down to a depth of 14 meters for up to two hours of continuous operation (equivalent to IPX 8 or JIS Class 8), but is also shockproof against falls from a height of 1.6 meters,* dustproof (equivalent to IPX 6 or JIS Class 6), freeze-proof to temperatures as low as -10°C, and crushproof against weights up to 100kgf (kilogram force). ** Thanks to this heavy-duty construction, the cameras perform superbly and dependably even in harsh, demanding outdoor conditions.

The WG-40 and WG-40W come equipped with a back-illuminated CMOS image sensor, which assures excellent high-sensitivity and low-noise characteristics and high-speed readout of image data signals. Coupled with a high-performance imaging engine, this image sensor delivers a top sensitivity of ISO 6400 and super-high-resolution images with approximately 16.0 effective megapixels. These models also provide advanced image processing functions, made possible by the latest super-resolution technology, to assure sharp, clear, high-resolution images. They even offer such innovative features as Handheld Night Snap mode, which automatically captures several images of the same nighttime scene and produces a single, blur-free composite image from them. Some upper-class features have also been added to these models to facilitate and upgrade scenic photography: white-balance optimization in the Landscape shooting mode reproduces brilliant greens of trees; and the Vibrant and Reversal modes add creative finishing touches, which were previously available only to PENTAX digital SLR cameras.

The WG-40 and WG-40W feature a high-performance, five-times optical zoom lens with a focal-length coverage from 5mm to 25mm (equivalent to approx. 28mm to 140mm in the 35mm format) to accommodate a wide range of scenes and subjects, including sweeping landscapes. They also provide other convenient shooting functions, such as a macro mode to capture dramatic close-up images from a minimum focusing distance of a mere one centimeter; an Intelligent Zoom function to extend the zoom range to approximately 36 times (equivalent to 1008mm in the 35mm format) without compromising image quality, for superior telephoto photography; and an interval shooting mode, which comes in handy for fixed-point observation.

Specifically designed for underwater photography, the Mermaid and Mermaid Movie shooting modes are programmed to optimize color and contrast, based on the data of images actually captured under the water. These modes deliver sharp, true-to-life images by enhancing the shades of red that are often lost in underwater photography, while effectively compensating for the loss of contrast caused by the diffusion of light in the water. By reviewing the aperture and shutter-speed control system, camera shake during underwater shooting has also been minimized. In the Mermaid mode, the Flash Off + Flash On mode, which has been available only to top-ranked models, has been newly added to the list of flash modes, allowing the user to consecutively capture two images of the same scene — one without flash illumination and another with it — with a single shutter release.

In combination with a smartphone, the WG-40W provides a host of Wi-Fi functions,*** including remote shutter release, confirmation of recorded images, and the setting of various shooting functions. The user can also browse and download recorded images to a smartphone, from which they can then be uploaded to social networking and other websites to share with family and friends.

*** OS/browser requirements: iOS (7.1 to 8.4)/Safari, Android (4.2 to 5.0)/Chrome.
Note: Proper operation is not guaranteed with all digital communication devices.

Ideally positioned around the circumference of the lens barrel for macro shooting, six LED Macro Lights allow the WG-40 and WG-40W to provide bright, uniform illumination on a subject when the Digital Microscope mode is selected.**** Thanks to these Macro Lights, the user can clearly see a magnified view of the microscopic world undetectable by the naked eye on the camera’s LCD monitor, and effortlessly capture eye-catching, close-up images. In order to minimize camera shake and subject shake, the Instant Illumination Enhance function allows for the use of a higher shutter speed by automatically raising the discharge level of the Macro Lights at the moment of shutter release. The Macro Lights also provide other useful functions, such as a Self-Portrait Assist mode, which uses the blink of an LED lamp to check if the subject’s face has been safely captured within the picture frame, and the LED Lighting mode, which uses the Macro Lights as a lighting device in the dark.

8. Triple anti-shake protection to prevent blurred images in all applications

(1) Pixel Track SR mechanism
When recording still images, this advanced shake-reduction mechanism effectively compensates for camera shake by digitally processing affected images.
(2) Digital SR mode
When the camera detects low-lighting conditions in still-image shooting, this mode automatically raises the sensitivity up to as high as ISO 6400, making it possible to use a higher shutter speed and effectively minimize the adverse effect of camera shake and subject shake when dealing with poor lighting conditions.
(3) Movie SR mode
During movie recording, this mode effectively compensates for the misalignment of images caused by camera shake through the use of exclusive software to produce beautiful, blur-free movie clips.

The WG-40 and WG-40W come equipped with a large, 2.7-inch LCD monitor with horizontally extended 16:9 proportions and approximately 230,000 dots. The monitor’s AR (Anti-Reflection) coating minimizes annoying glare and reflections to assure a sharp, clear on-screen image even in the harsh sunshine often encountered during outdoor shooting.