Sony is introducing its lens development roadmap, which shows that Sony aims to release a total of over twenty α E-mount lenses supporting 35 mm full-frame sensors in 2016.  The lenses will be on-display for reference at Photokina. 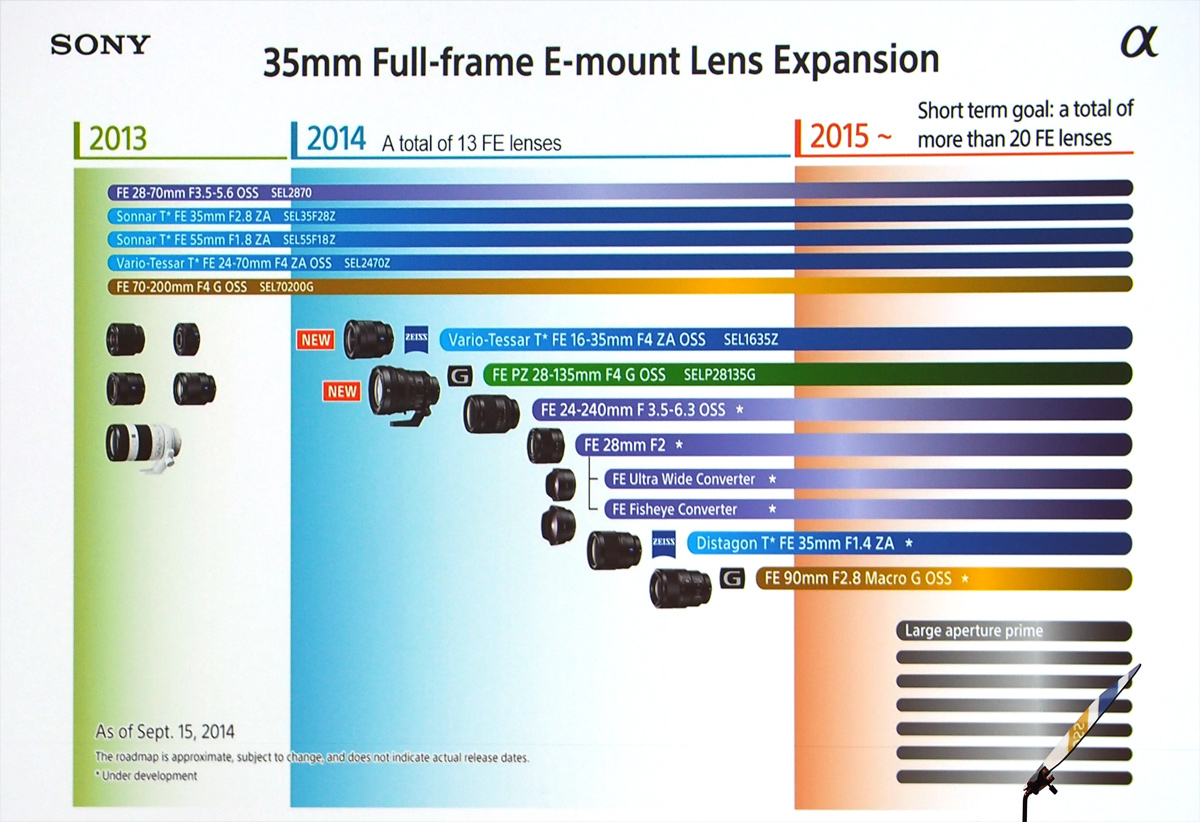 The new “under development” Sony FE lenses are as follows

The third lens is the Sony FE 24-240mm f/3.5-6.3 10x optical zoom lens with OSS (Optical Steady Shot), which is due to be released February 2015. The fourth lens shown as under development, is the FE 28mm f/2 prime lens, which is said to be the most affordable prime lens for the Sony FE-Mount available, the lens will be release with a 16mm Fish-eye converter, as well as a 21mm ultra-wide angle converter. These are due to be launched in March 2015. 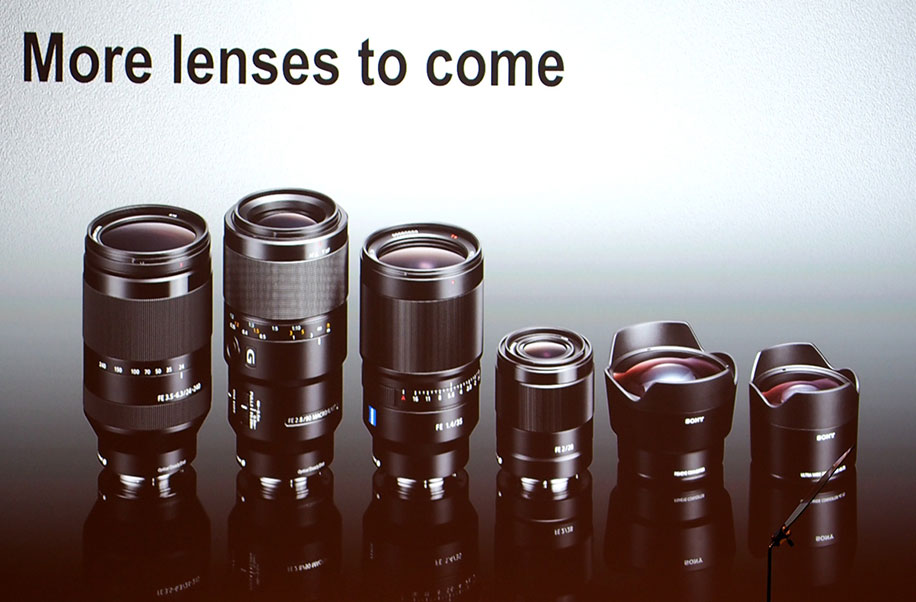 Sony to exhibit at Photokina 2014

London, UK – September 16, 2014 – At ‘Photokina 2014,’ the leading international trade fair for the photography and imaging sector in Cologne, Germany, Sony Corporation (“Sony”) is showcasing the PXW-FS7 XDCAM™ memory camcorder with interchangeable lens system alongside its range ofα interchangeable-lens cameras, and the full range of α mount system lenses, including the new high-performance range of ‘α’ lens products compatible with full-frame 35mm sensors. Sony is also showcasing the “4D FOCUS,” auto focus system which consists of a wide horizontal/vertical coverage area, rapid autofocus (AF), and a unique AF system that achieves high predictive precision, all of which are incorporated in products such as the ‘α6000’ and promote as one of its leading technologies for cameras.

This event will also introduce prize-winning works from the ‘Sony World Photography Awards 2014’, which Sony has been supporting since 2007.

Sony is showcasing its α7 series, which incorporate a full-frame 35 mm CMOS sensor in compact, lightweight interchangeable-lens camera bodies, as well as the α6000.

Combining an Exmor® CMOS 35mm sensor, with approximately 12.2 million effective pixels, and the BIONZ X™ image processing engine, the α7S facilitates photography with high sensitivity and low noise, for both still photographs and video, with an extremely wide range of sensitivity and dynamic range.

The A-mount camera line-up boasts leading technologies and an abundant range of high-performance interchangeable lenses to enable users to enjoy the pursuit of emotion and expression by taking photographs.

The latest model in the A-mount range is equipped with an Exmor CMOS sensor with approximately 24.3 million effective pixels and a 79 focal point phase detection AF sensor (15 cross points)*2; the world’s highest*3. The α77 II achieves high picture quality and tracking performance, as well as excellent AF precision, thanks to its new AF algorithm. Even with a moving target, the AF continuously tracks the subject for high-speed continuous burst shooting (up to 12 frames per second*4 burst of up to 60 full-resolution frames*5) to capture the desired moment in time.

*2： The supported number of range points varies depending on the lens.

*4： In Continuous Advance Priority AE mode. The aperture is F3.5 to prioritize continuous shooting, while the aperture

value is controlled for lenses with aperture smaller than F3.5.

Utilising α E-mount lenses, and equipped with a 4K Exmor Super 35 mm CMOS sensor (approx. 11.6 million total pixels, and 8.8 effective pixels), this model supports recording in 4K XAVC*6. The new ergonomic design*7 ensures that superior maneuverability is possible, even for one-man operation, in any shooting style whether on-the-shoulder, handheld, or held in a low position.

This firmware update is scheduled for release during the fourth quarter of FY 2014.

*7： Ergonomic design: This refers to design that has been optimized to enable people to move more naturally, effortlessly, and efficiently, based on the field of research known as human engineering (ergonomics).

The SEL1635Z delivers extremely high resolution that enables the sharp depiction of objects, right to the very edge of the screen, and reduces distortion and field curvature to the absolute minimum. In addition, the use of ED (extra-low dispersion) glass allows chromatic aberration to be suppressed. The ZEISS T* (“T-star”) coating provides high-contrast representation capabilities to control reflected light on the lens surface. The excellent optical performance is well-suited to authentic landscape photography and makes full use of the wide angle lens.

The world’s first*9 standard lens that supports a 35 mm full-frame sensor, while also equipped with a motorized zoom lens. It was designed to deliver optimized operability and optical performance for shooting high-quality video, such as 4K, and to be compatible with the α7 series, and the PXW-FS7 professional-use camcorder, which was announced at IBC 2014. Sony has incorporated SSM (Super Sonicwave Motor) as the zoom lens drive, to facilitate smooth, quiet operation. This is the first time an α lens has been equipped with the three-faceted operational ring of “zoom-focus-aperture,” to enable a wide range of zoom speed controls and zoom direction reversal*10.

*8: This model was announced in Europe.

*9: As a lens for digital cameras with interchangeable lens systems. * Current at the time of this press release; as investigated by Sony.

Including these lenses, Sony is introducing its lens development roadmap, which shows that Sony aims to release a total of over twenty α E-mount lenses supporting 35 mm full-frame sensors in 2016.

Sony is showcasing the highly acclaimed RX series, which are equipped with 35 mm full-frame Exmor sensors and 1.0-inch backlit Exmor R CMOS sensors, and continue to deliver superior picture quality without compromise, despite their compact size.

Sony will display its series of Lens-style cameras. These cameras can be connected to the user’s smartphone*12 via Wi-Fi to enjoy shooting when attached to the smartphone, or to shoot handheld selfies, or stills or videos*13 from any angle, when detached from the smartphone.

This is the first model in the series with an interchangeable lens option, and offers the same large-sized APS-C sensor as an interchangeable lens camera. Enjoy high picture quality with beautiful bokeh effects, shoot clear night scenes with high sensitivity and low noise, or attach α mount system*14 lenses to explore an even wider range of creative options.

Equipped with a Sony G lens (an optical 30x zoom lens) and optical image stabilization. Distant subjects that are hard to capture using the built-in camera on a smartphone can now be shot with greater accuracy.

*13: Some types of photography, such as shooting videos or continuous shooting, require a memory card to be used with the camera.

*14: An adapter is required to attach an A-mount lens. Some features may be restricted when the adapter is attached.

Weighing just 63g*15, this model can be attached to the user’s body or, for example, to bicycle handlebars, to enable easy shooting while enjoying sports such as snowboarding, mountain biking, or surfing. By equipping the new Live View Remote (bundled accessory) with GPS recording functionality, Sony has succeeded in delivering a camera that is approximately 1/3 more compact and lightweight than the current model (HDR-AS100V). In addition to the aforementioned sporting scenarios, this camera will enable powerful, high-quality experiential footage to be photographed in an even wider variety of situations, from travel through to leisure activities.

*15: Weight including the battery. (weighs approx. 48g without the battery)

Equipped with a 1.0-type back-illuminated Exmor R™ CMOS Sensor, image-processing engine, and newly-developed lens optimized for high-definition 4K video. It successfully depicts texture exactly as you see it, with high-definition perspective. This model is more compact and lightweight than its predecessor, the FDR-AX1, with approximately 1/4 less surface area and 1/3 less mass, enabling easy shooting in 4K*16/30p*17.

The ‘Capture One’ RAW converter and image editing software from Phase One has been newly adapted for Sony. ‘Capture One Express (for Sony)’ will be provided at no extra charge to users who purchase an α interchangeable-lens camera or Cyber-shot RX digital still camera. This image processing tool incorporates an advanced RAW image processing engine to enable delicate images to be finessed to deliver a high-quality finish.

* Any company names and/or product names mentioned in this document are trademarks or registered trademarks of the respective corporations.