As we are getting closer to the start of the Photokina 2014 event, a Chinese website is already listing the unannounced A7X, NEX-9, and RX2R cameras.

The A7X, NEX-9, and RX2R are all rumored cameras to be unveiled at Photokina 2014. Some information about these cameras have already been leaked by the rumor mill. (see the headlines below)

The listing on Chinese website, Zol.com (translated version) also includes the Sony ILCE-QX1 which is currently filed for a “Certificate of Compliance” in Russia and described as “interchangeable lens digital camera”.

We can expect these cameras to become official for the Photokina 2014 event. Now let’s look at some details posted earlier for the rumored Sony A7X, NEX-9 and RX2R. 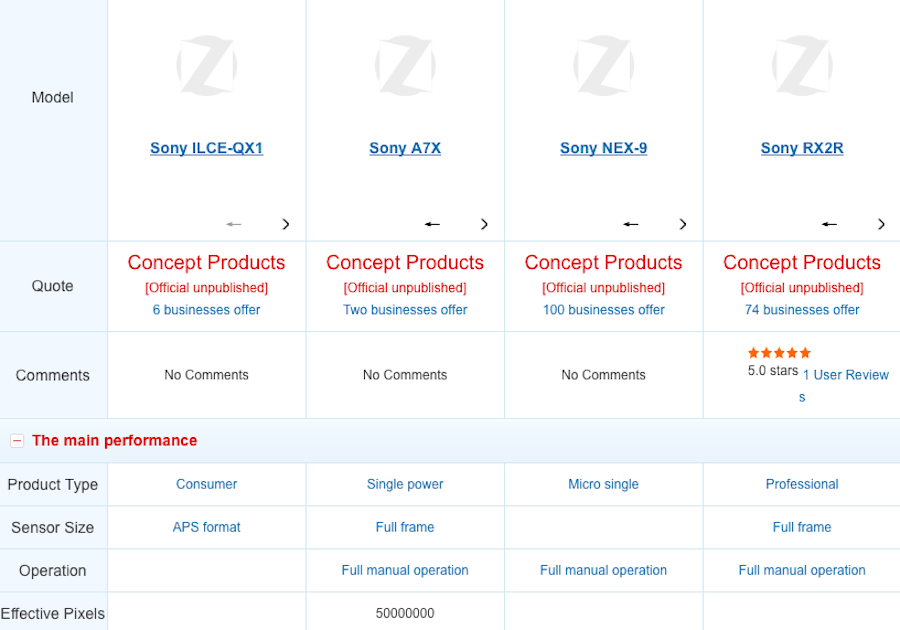 Sony is rumored to announce a high-resolution full frame camera for Photokina 2014 event in September. As we mentioned earlier the camera could be named Sony A7x and expected to feature 50-megapixel sensor.

Now according to the listing, the upcoming Sony RX2R is expected to be the world’s first consumer camera with a Zeiss 35mm f/1.8 lens and a curved full frame 35mm-type sensor.

In late 2013, the name Sony NEX-9 has been rumored many times for the NEX-FF camera. If there will be a Sony camera with a “NEX” brand on it, the possibility refers to a NEX-7 replacement camera. As we already have the A7 series mirrorless cameras with full frame sensors.

According to the listing Sony NEX-9 will feature on-sensor image stabilization technology.

Stay tuned as we’ll learn if all these cameras become official or not in a week or more right before the Photokina show.