Nikon has announced the SB-500 Speedlight, a compact flash with a built-in LED for use while recording video.

The Nikon SB-500 is the company’s first Speedlight with a built-in LED light. The flash head and LED light both cover a wide 24 mm angle of view in FX-format, or a 16mm lens on DX, and easy-to-understand controls on the rear of the unit ensure simple operation. 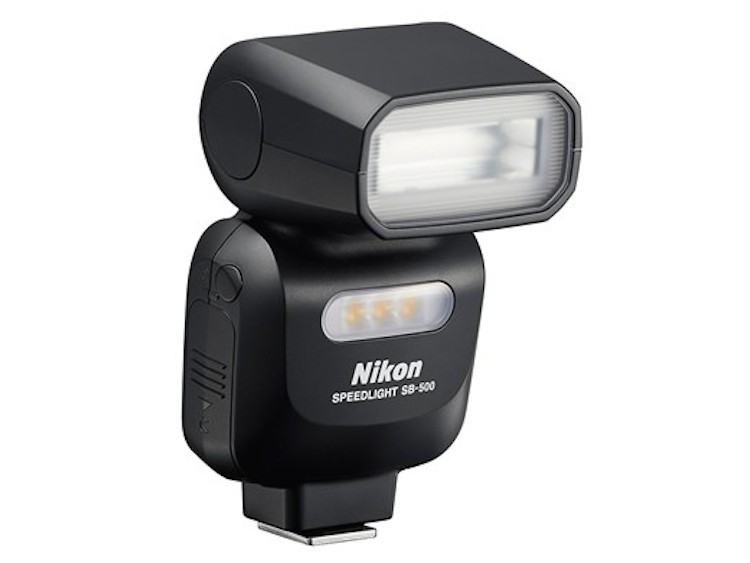 Take control of the lighting in your stills and HD videos

As you master your camera, you begin to look at lighting in an entirely new way. No longer is proper exposure your only goal—now you can use shadows and brightness to add a sense of depth, an artistic characteristic to your photos and HD videos. A first for Nikon Speedlights, the SB-500 AF Speedlight is a compact, lightweight i-TTL Speedlight and LED video light that gives you total control of the light around you. Whether you’re looking for extra illumination during HD video recording, a wireless off-camera flash to use along with your camera’s built-in commander mode, another Nikon Speedlight like the SB-700 or SB-910 or the SU-800 Wireless Speedlight Commander or just an advanced and versatile—yet simple to use—Nikon Speedlight, the SB-500 AF Speedlight is a bright idea.

The SB-500 AF Speedlight has simple controls—just a few buttons —and it operates on two AA batteries; yet, it offers the performance of an advanced Speedlight. Its powerful and has wide coverage with a guide number of 24/78.7 (ISO 100, m/ft) with 24mm coverage in FX-format and 16mm coverage in DX-format. Its head rotates 180° left and right and tilts 90° upward allowing you to bounce light off nearby surfaces to soften the light and shadows, creating more flattering portraits. If your camera has a Commander Mode, it can even be used wirelessly off-camera along with your camera’s built-in flash for greater illumination power from interesting angles.

The SB-500 AF Speedlight is also a versatile video light especially well suited for recording interviews up close. It has a built-in high-intensity LED light (approx. 100 lux) that provides steady, uniform daylight-balanced illumination. It can be used at three output levels—quarter, half or full power—making it practical for low-light video shooting and close up still photography. And when used with the D810 or D750, the SB-500 AF Speedlight communicates LED color information (along with that of the flash) to the camera for optimal white balance.

Nikon’s i-TTL technology (intelligent Through-The-Lens) tailors the characteristics of the flash to each shot you take, so you get optimal results every time. With that intelligence and more illumination power than a camera’s pop-up flash, the SB-500 AF Speedlight is excellent as a fill-light outdoors (brightening shadowy areas on your subject) or for soft bounce lighting indoors. Use it off-camera wirelessly as a second flash controlled by either your camera’s built-in flash (if your camera has a Commander Mode), another Speedlight or the SU-800 Wireless Speedlight Commander. If you’re using D810 or D750 in Commander Mode, the SB-500 AF Speedlight will also work as a master flash in Advanced Wireless Lighting.