Fujifilm has announced the launch of the TCL-X100, a tele-conversion lens designed specifically for the Fujifilm X100 and X100S cameras. 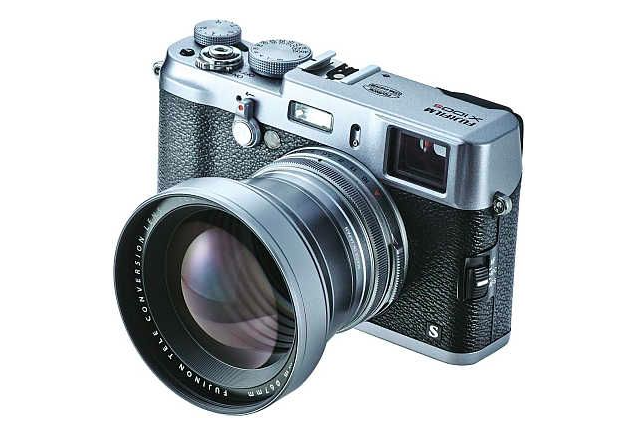 Fujifilm is pleased to announce the launch of the TCL-X100, a tele-conversion lens designed specifically for the Fujifilm X100 and X100S cameras. The lens attaches directly onto the camera and increases picture taking versatility by multiplying the fixed focal length by approx. 1.4x, converting it from 23mm (35mm in 35mm equivalent) to a 33mm fixed focal length (50mm in 35mm equivalent).

This is Fujifilm’s second conversion lens for the X100 and X100S cameras and follows on from the WCL-X100 wide-conversion lens. Both conversion lenses offer Fujifilm’s supreme optical quality and are created by the same experts who designed the X100/X100S’s lens. The TCL-X100 delivers high image quality even at the F2.0 wide aperture setting, retaining the original optical characteristics.

This optical excellence is underlined by the fact that the TCL-X100 is manufactured in Japan, allowing Fujifilm engineers to guarantee precision and quality in every component. The optical construction uses four premium glass elements in four groups to keep aberrations to a minimum and also employs Fujinon’s unique Super EBC coating for outstanding results.

Achieving the very best results from the TCL-X100 is simple; just select the ‘Tele- Conversion Lens’ option in the Fujifilm X100/X100S’s shooting menu. To enable this extra functionality, the camera must be updated with the latest firmware (X100 : ver2.10 or later / X100S : ver1.20 or later) which also allows the option to be selected via the function (Fn) button.

In practice, the TCL-X100 enhances the functionality of the Fujifilm X100/X100S. The auto focusing speed remains the same, the 10cm macro distance still applies and it is also compatible with the Fujifilm X100/X100S’s hybrid viewfinder. With the optical viewfinder (OVF) selected, icons showing the edge of the frame are displayed, while selecting the electronic viewfinder (EVF) gives users a 100% field of view.

The perfect match for the Fujifilm X100/X100S

The design of the TCL-X100 has been carefully considered to ensure it blends seamlessly with the look and feel of the cameras. It is manufactured using the same materials, textures, colors and finishes as the X100 and X100S.