SanDisk has announced the first CFast 2.0 compact flash memory card in the world.  SanDisk Extreme Pro CFast 2.0 card read speeds up to 450MB/s and write speeds of up to 350MB/s.

As a competitor to the Nikon-backed XQD standard, this first CFast 2.0 card is introduced alongside with an ARRI AMIRA documentary-style camera that records to internal CFast 2.0 cards. Some Canon’s 4K video-capable cameras will support this CFast 2.0 card.

SanDisk Extreme Pro CFast 2.0 card available over the following days in the US and Europe. Pricing yet unknown. 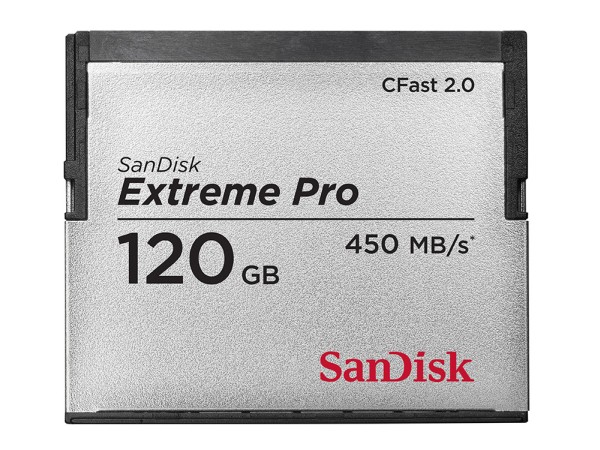 “With the SanDisk Extreme Pro CFast 2.0 card, we are enabling a next generation card format to meet the needs of high-end professional cinematographers,” said Dinesh Bahal, vice president, product marketing, SanDisk. “These cards will enable new digital solutions for professional filmmakers looking to embrace technologies such as high-quality 4K video, and are another example of SanDisk’s innovation and leadership in flash memory storage.”

The SanDisk Extreme Pro CFast card is the first to utilize the CFast 2.0 specification. This specification was a collaboration of leading CompactFlash Association members to meet the demanding requirements of professional video and photography applications. Early adopters and endorsers include SanDisk, Canon, ARRI and Codex. The result of this alliance is the CFast 2.0 specification, delivering a new level of performance for next generation professional video and photography cameras.

Leading motion picture equipment manufacturer ARRI, will be the first to implement CFast 2.0 as recording media in a camera. The new documentary-style ARRI AMIRA will record to in-camera CFast 2.0 cards, and ALEXA XT camera users will be able to use a new CFast 2.0 adapter, allowing ALEXA XT cameras, as well as ALEXA Classic cameras upgraded with the XR Module, to do the same. Stephan Schenk, general manager of ARRI’s camera and DI systems business unit said, “SanDisk’s new SanDisk Extreme Pro CFast 2.0 cards deliver tremendous performance, allowing professionals to record ProRes 4444 up to 200Fps with AMIRA, and up to 120Fps with ALEXA XT/XR cameras, on cost-effective recording media.”

This new high-performance card format is reliable and equipped with a durable form factor. The SanDisk Extreme Pro CFast 2.0 cards are created to withstand real-world exposure to temperature, shock and vibration, and include a pinless design, which lessens the chance of damaging the card or camera while changing cards. The cards will also be marked with a unique individual serialization number that can be registered into SanDisk Pro Care Customer Support. Additionally, a lifetime limited warranty4 and a downloadable offer for a one year subscription to RescuePRO® media recovery software5 are available.

SanDisk Extreme Pro CFast 2.0 memory cards are available in the U.S. and Europe at select photo specialty stores and at ARRI authorized storefronts in 60GB and 120GB capacities.

Also available is the SanDisk Extreme Pro CFast 2.0 Reader/Writer, the world’s first CFast 2.0 memory card reader, designed for professional photographers and videographers in the broadcast, cinema and photography industries. Small enough for field work, the reader is built to handle the high performance demands of CFast 2.0 technology and increase workflow efficiency with support for USB 3.0 interface transfer speeds up to 500MB/s6.