Nikon officially announced Coolpix S6600 compact camera that is offering high-power zoom and vari-angle monitor for shooting from any angle.

The 25-300mm equivalent lens offers a built-in lens-shift vibration reduction (VR) function and supports macro photography with shooting as close as 2cm to the lens. 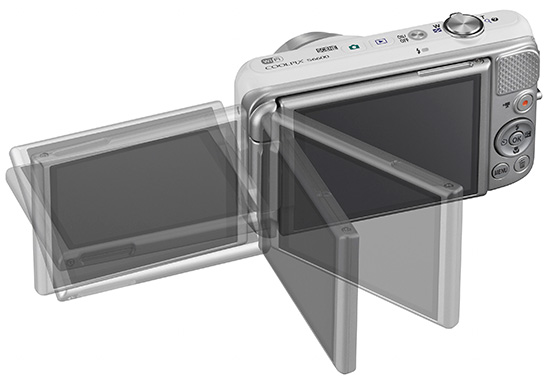 TOKYO – Nikon Corporation is pleased to announce the release of the S6600, the first COOLPIX S-series model equipped with a vari-angle monitor.

As the first COOLPIX S-series model equipped with a side-hinged vari-angle monitor, the S6600 is capable of flexible shooting, from low angles to high, and even self portraits. It is also equipped with a Gesture Control function that allows the user to control the camera remotely by moving their hand when taking self portraits. The camera is equipped with a backside illumination CMOS image sensor with an effective pixel count of 16.0-million pixels that enables very little noise in images captured at high sensitivities, a lens-shift vibration reduction (VR) function, and a 12x optical zoom NIKKOR lens with a closest focusing distance of just 2 cm for macro photography. With built-in Wi-Fi®, users can easily transfer images to smart devices such as smartphones and tablets.

The S6600 is the first COOLPIX S-series camera to be equipped with a vari-angle monitor. A side-hinged vari-angle monitor has been adopted for the slim body, enabling flexible shooting from any angle, whether low or high, and even self portraits. In addition, Gesture Control recognizes the palm of the hand when the monitor is rotated to face the user, making it possible for users to perform a number of operations, including releasing the shutter and zooming in and out by simply moving their hand toward the appropriate icon displayed in the monitor. This function can also be used with movie recording.

With built-in Wi-Fi®, users can easily transfer* images to smart devices such as smartphones and tablets. Users can easily share high-quality still images captured with the S6600 with friends and family by uploading them to social networking sites. Smart devices can also be used for remote shooting, which is convenient for group photos. In addition, location information acquired by smart devices can be added to images when they are downloaded from the camera.

The camera is equipped with a 12x optical zoom NIKKOR lens that covers the wide-angle 25 mm to 300 mm (equivalent focal lengths in 35mm [135] format) range of focal lengths, and offers a built-in lens-shift vibration reduction (VR) function. The lens also supports macro photography with shooting as close as 2 cm to the lens.

It has an effective pixel count of 16.0-million pixels. The camera is also equipped with an amazing backside illumination CMOS sensor with which each pixel receives light more efficiently for superior high-speed processing performance. This enables capture of images exhibiting little noise at the high sensitivities required for low-light situations such as night landscapes and indoor shooting.

A wide variety of shooting functions for capturing decisive moments

The camera is also equipped with a number of advanced functions that enable capture of decisive moments so users will never miss a photo opportunity. Among these functions are Target Finding AF, where the user need simply point the camera at the desired subject and the camera instantly predicts and focuses on the intended subject, automatically specifying focus area and focus area size, Scene Auto Selector, which automatically specifies the optimal scene mode, and Smile Timer (Continuous), with which the camera detects smiles and captures up to 5 images continuously so that the perfect smile is never lost.

The red-eye correction function is also capable of natural correction of the red-eye phenomenon for pets such as dogs and cats, and the eight Glamour Retouch options allow users to retouch images to create memorable portraits to emphasize a person’s image and expression.

In addition, Special Effects (applied with shooting) and Quick Effects (applied immediately after shooting or with image playback) have been improved to enable capture of images as intended with simple operation. Among these improvements are the Mirror special effect, which creates a bilaterally symmetric image with which the right half is an inverted mirror image of the left half, and the new Soft Portrait quick effect, which allows users to blur the background to emphasize a human subject.

1920 x 1080/ 60i movies with superior picture quality and stereo sound can be recorded by simply pressing the camera’s movie-record button. In addition, the S6600 offers a movie pause function, with which recording of a single movie file can be paused and then restarted (within 5 minutes). By saving multiple scenes recorded intermittently to eliminate unwanted portions as a single file, users can enjoy playing back one continuous movie. There is also a function for preserving only the desired portion of a movie file.