This year’s award was selected with voting by general users between March 25 and April 14, 2013. After Nikon D800E selected this year, Nikon digital cameras have received the Readers Award five times in the past six years. 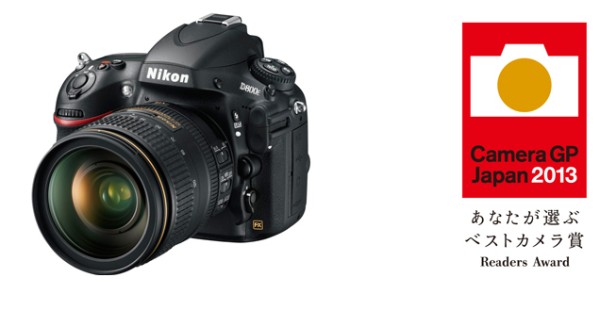 TOKYO – Nikon Corporation is pleased to announce that its D800E digital SLR camera is the recipient of the Camera GP 2013 Readers Award. The Camera Grand Prix Awards (sponsored by the Camera Journal Press Club) select the best products sold over the past year in Japan.

The Readers Award was established in 2008 to commemorate the 25th anniversary of the Camera Grand Prix. The recipient of this year’s award was selected with voting by general users between March 25 and April 14, 2013. With the selection of the Nikon D800E this year, Nikon digital cameras have received the Readers Award five times in the past six years, including selection of the Nikon D800 last year.

The D800E offers the world’s highest* pixel count with an incredible 36.3-million effective pixels, and offers even greater sharpness than the D800, which has been so well received the world over as well as being the recipient of a TIPA Award 2012 and a European Imaging and Sound Association (EISA) Photo Award. The D800E is equipped with an optical low-pass filter. However, it is structured in such a way that its function has been optically disabled without sacrificing the high level of basic performance or flexibility also available with the D800. Therefore, light passing through NIKKOR lenses strikes the CMOS image sensor more directly to maximize resolution. As images with incredibly high resolution and superior three-dimensional feel are possible, the camera is well suited to landscape and artistic photography that demands excellent sharpness and definition. Since its release, the camera has been very well received by a broad range of advanced amateur to professional users.

A selection of comments from general users