Canon today announced that it has now produced 90 million EF lenses since the launch of the EOS system in 1987.

The proliferation of digital SLRs has seen a rapid increase in lens production in recent years, and the company’s 90 millionth lens – an EF 24-70mm f/2.8L II USM – was manufactured on May 23 2013, just over 9 months after its 80 millionth.

The company’s lens lineup currently consists of no fewer than 84 models, ranging from the inexpensive EF 50mm f/1.8 II to high-end exotica such as the recently-announced EF 200-400mm f/4L IS USM Extender 1.4x – the world’s first SLR lens with a built-in switchable teleconverter. 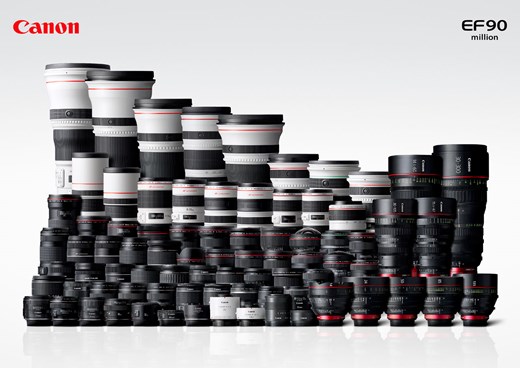 MELVILLE, N.Y., May 29, 2013 – Canon U.S.A., Inc., a leader in digital imaging solutions, today announced its parent company, Canon Inc., has reached a new lens-manufacturing milestone with the production of its 90-millionth EF-series interchangeable lens for EOS cameras. Canon turned out its 90-millionth lens, an EF 24-70mm f/2.8L II USM (released in September 2012), on May 23, 2013.

Canon’s proprietary EF lenses, launched in March 1987 along with the EOS SLR camera system, have continued to evolve since their introduction, leading the industry through the incorporation of a wide range of innovative technologies, including the Ultrasonic Motor (USM), Image Stabilizer (IS) technology, a multi-layered diffractive optical (DO) element, and Subwavelength Structure Coating (SWC) anti-reflection technology.

With the introduction in May this year of the EF 200-400mm f/4L IS USM Extender 1.4x, super-telephoto zoom lens with a built-in 1.4x extender that makes possible a 200-560 mm focal length range, along with EF Cinema Lenses for digital cinematography, Canon’s extensive EF lens-series lineup now comprises a total of 84 models.1

Canon will continue refining its diverse imaging technologies based on its core optical technologies, striving to produce exceptional and reliable lenses and cameras that cater to the varying needs of photographers-from first-time users to advanced amateurs and professionals-while contributing to expanding the photographic and video imaging culture.