In commemoration of NIKKOR’s 80th anniversary, Nikon hopes to strengthen and increase awareness of the historic and reliable NIKKOR brand with various promotions in 2013. The first step toward achieving this objective is the creation of a NIKKOR 80th anniversary logo that will be used in Nikon product brochures, advertisements, and various other forms of communication. The anniversary logo will embody NIKKOR’s image of taking the lead in every age based on optical technologies developed over its long history. 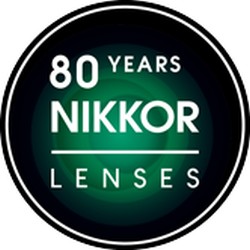 NIKKOR’s history began in 1932 with Nikon’s (then Nippon Kogaku K.K.) registration of the NIKKOR trademark, soon followed in 1933 with the first shipment of Aero-Nikkor aerial photographic lenses. Since then, Nikon has continued to develop lenses for both film and digital cameras. Always loaded with cutting edge optical technologies of the times, NIKKOR has grown to be a brand known for high-performance lenses.

In 1959, Nikon (then Nippon Kogaku K.K.) released its first SLR camera, the Nikon F as well as its first lens for Nikon SLR cameras, the NIKKOR-S Auto 5cm f/2. The Nikon F mount, adopted for the Nikon F, continues to be the mount used in the latest Nikon digital-SLR cameras. In addition, with the release of the new Nikon 1 series of advanced cameras with interchangeable lenses incorporating the new 1 mount, Nikon has steadily released dedicated 1 mount lenses developed with optical technologies cultivated over the years, advanced technologies, and offering the superior image quality users have come to expect since 2011. As a result, total production of NIKKOR lenses for cameras with interchangeable lenses reached 75 million in November 2012.

The OP Fisheye-Nikkor 10mm f/5.6 fisheye lens for SLR cameras, released in 1968, was the world’s first lens to incorporate aspherical lens elements. The Ultra Micro-Nikkor 105mm f/2.8, released in 1962, served as the template for projection lenses employed in Nikon IC steppers and scanners that currently boast some of the highest resolutions in the world. What’s more, NIKKOR lenses for the latest SLR cameras utilize a number of cutting-edge technologies that originated with the development of IC steppers and scanners, including Nano Crystal Coat, which virtually eliminates internal lens element reflections across a broad range of wavelengths.

From initial design to final packaging, production and quality is controlled in accordance with Nikon’s strict standards. The superior quality of NIKKOR lenses that respond to the needs of users is ensured with the highest quality designs and manufacturing, as well as very strict quality inspections.