The Panasonic Lumix DC-S5 II is the company’s latest version of their mid-range full-frame stills and video mirrorless camera. It adds phase detection autofocus to its 24MP CMOS sensor and uses the L mount shared with Leica and Sigma. Panasonic DC-S5 IIX is a variant with a more extensive video feature set, which will arrive later in the year. 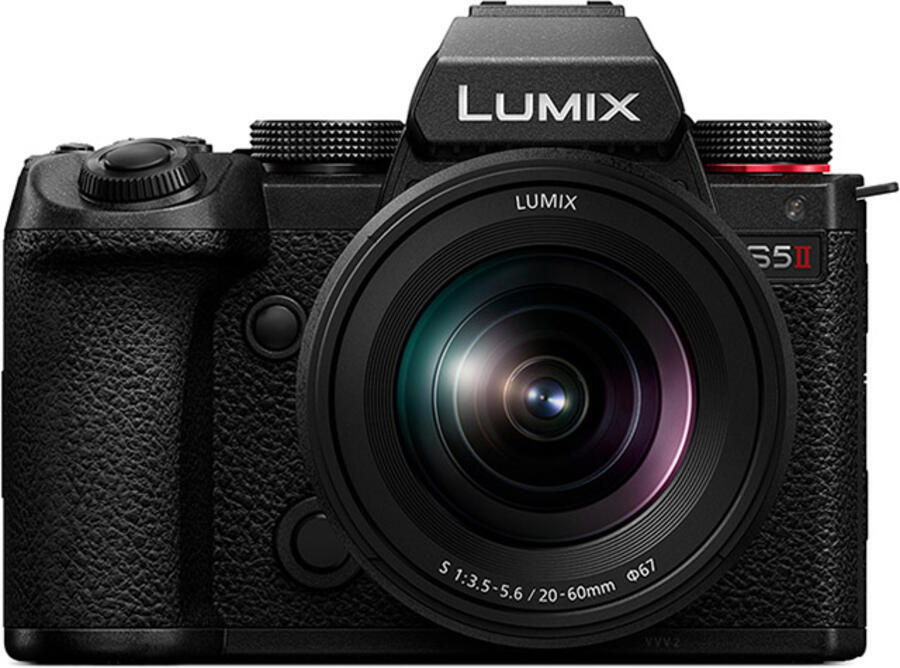 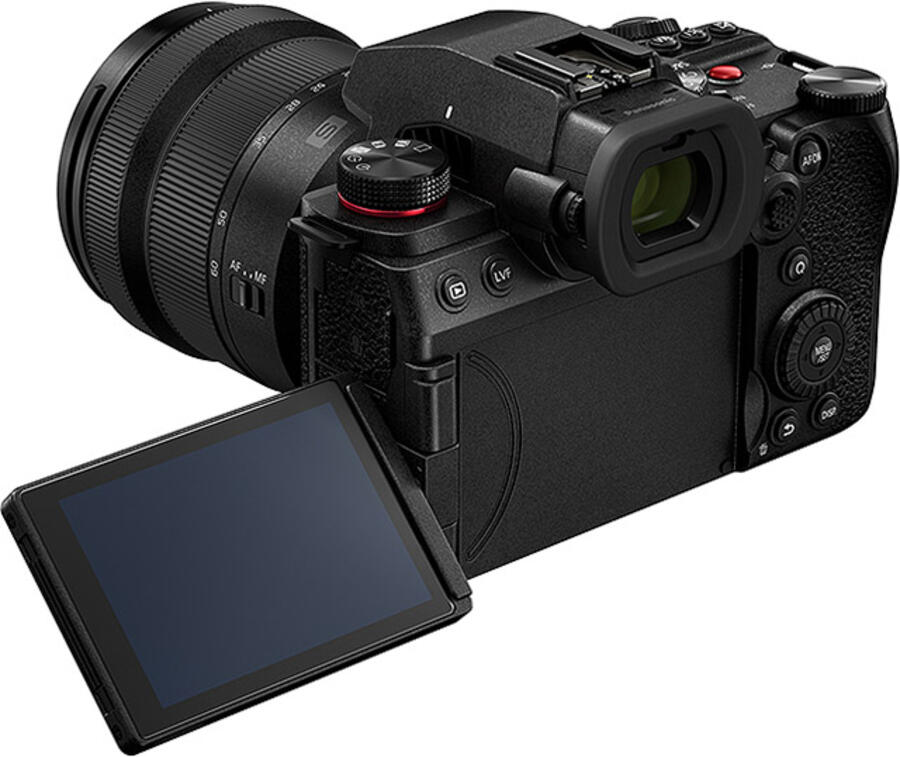 The S5II and S5IIX utilize Phase Detection Auto-Focus (PDAF), satisfying the demand for the feature in LUMIX mirrorless cameras

Las Vegas, NV (January 4, 2023) – Panasonic is proud to announce two new hybrid full-frame mirrorless cameras, the LUMIX S5II and S5IIX, as the latest additions to its LUMIX S Series camera line-up. The LUMIX S5II and S5IIX are the first LUMIX mirrorless cameras to utilize Phase Detection Auto-Focus (PDAF) thanks to a newly developed 24.2-megapixel 35mm full-frame CMOS sensor and a new imaging engine. Developed under the L² Technology alliance formed by LEICA and LUMIX earlier this year, the new imaging engine provides high resolution, natural description, and approximately 2x higher-speed signal procession for high bit-rate video recording. To further the cameras’ PDAF capabilities and make them more dependable, Panasonic evolved the auto-focus system into Phase Hybrid Auto-Focus by increasing the AF points to 779 to significantly improve subject tracking. Once the S5II and S5IIX are locked on a subject, the auto-focus will continue to track the subject, even in adverse lighting conditions and when multiple objects are moving within the frame. Additionally, continuous AF during zooming*1, AF micro adjustments, and options to decrease the size of the AF area are available. 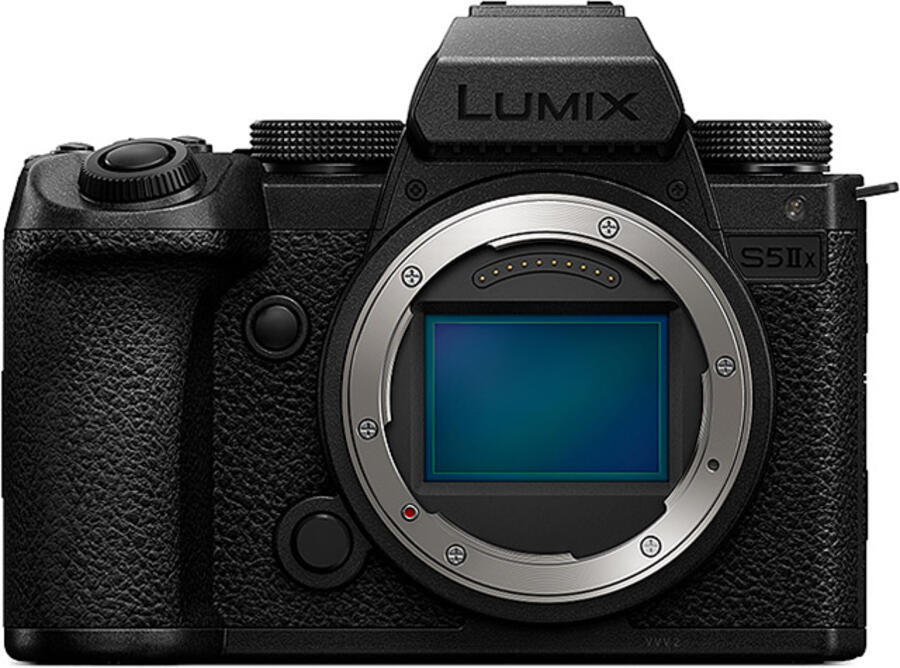 The LUMIX S5II and S5IIX have a powerful image stabilization system for wide-ranging shooting conditions and situations. The Body I.S. (5-axis) in the LUMIX S5II and S5IIX i and the O.I.S. (Optical Image Stabilizer, 2-axis) from the LUMIX S Series lens were combined to create the 5-axis Dual I.S. 2, maximizing the correction power to allow 6.5-stop slower shutter speed*2. The 5-axis Dual I.S. 2 works for both photo and video recording, including 4K. In addition, Active I.S. has been added for even more stable video recording. Active I.S. optimizes the horizontal, vertical, and rotational correction ratios by determining the status of camera shake. As a result, the performance of the image stabilizer can account for a larger amount of camera shake at approximately 200%*3 compared to conventional image stabilization. This capability is highly beneficial in adverse situations, such as handheld filming or telephoto fixed-frame shots.

The new imaging engine provides the LUMIX S5II and S5IIX with high video performance comparable to the LUMIX S1H. They provide 4:2:0 10-bit 6K (3:2) / 5.9K (16:9), unlimited 4:2:2 10-bit C4K/4K recording capability*4. With a new heat-dispersion mechanism, there is no limit on recording time to avoid overheating*5. HFR (High Frame Rate) in C4K/4K (48p), FHD (120p), Slow & Quick motion in C4K/4K(1-60fps) / FHD(1-180fps) are also available. The LUMIX S5II and S5IIX contain 14+ stop V-Log/V-Gamut capture to deliver a high dynamic range and broad colors. Plus, a REAL TIME LUT function is provided to enable color grading on the compatible video and photo in camera by applying the LUT(.VLT/.cube) saved in the SD memory card. Users can perform intended color grading on the spot without postproduction and share images online through social networking sites. This function can be used for livestreaming.

In addition to the PDAF capabilities mentioned above, the LUMIX S5II and S5IIX provide:

2. A variety of video functions and recording options

Alongside the recording capability, new heat dispersion mechanism and 14+ stop V Log/V Gamut capture mentioned above, the LUMIX S5II and LUMIX S5IIX feature unique shooting options such as the 4K60p interval shooting and 4K HDR video recording. In response to requests from professional users, video assist functions such as Waveform Monitor, Vector Scope and Zebra Pattern are available. Some features offered on the LUMIX S1H and LUMX GH6, like System Frequency (24.00Hz), Synchro Scan, Fan mode and redesigned control panel, which enables quick selection of menu, are also available on the LUMIX S5II and S5IIX.

3. Excellent operability and functions to minimize workflow for one man crew operation

Building upon the functionality of the LUMIX S5, a wealth of options was added to the LUMIX S5II and S5IIX to provide users with a superior shooting experience. AWB Lock maintains the white balance set in auto. Sheer Overlay can now be used in Creative Video mode making it easy to fix the frame through footage sequence. Luminance level of 2100 Like (HLG) in Photo Style for video has an extended setting range from 64-940 to 0-1023, providing sufficient amount of color grading resistance. In addition to FHD it is now possible to output a 4K image with the live crop function. To support high precision focusing, the LUMIX S5II and S5IIX provide practical options for manual focusing. While focus is shifted with variable amount according to the rotation speed of the focus ring for non-linear setting, it is shifted with a designated amount according to the rotational quantum of the focus ring for linear setting. Sensitivity (amount of focus shift per rotational quantum) can be selected from 90 to 1080 degrees to enable intended focus operation. The MF Assist, which enables the focus point to be enlarged, is now available in both photo shooting and in video recording*10.

The LUMIX S5II and S5IIX adopt a large, 3,680K-dot OLED (Organic Light-Emitting Diode) LVF (Live View Finder) that features a high magnification ratio of approx. 1.52x / 0.76x (35mm camera equivalent). A 3.0-inch free-angle touch-control monitor in 3:2 aspect with 1,840K-dot high resolution does not cause interference even when both the HDMI cable and USB cable are connected by adjusting the tilt/rotation angle of the monitor. There are improvements in external design, including new easy-to-operate 8-directional joystick and the drive dial with an increased setting position for 96-megapixel High Resolution Mode (JPEG/RAW).

4. Reliable quality and performance for professional use and connectivity

Overheating is a fatal issue to continuous video recording, especially when the resolution and the frame rates are increased. The LUMIX S5II and S5IIX adopt a new heat dispersion mechanism that combines a small fan and high-efficiency heat sink. As a result, the LUMIX S5II and S5IIX achieve unlimited video recording time*11*12 and livestreaming*13 in C4K 60p while keeping the camera size compact. In case the camera stops while 4K video recording, the small fan operates separately to cool down the unit for quick recovery.

To withstand heavy field use, the LUMIX S5II and S5IIX are composed of a magnesium alloy full die-cast front / rear frame and is splash-resistant*14 and dust-resistant.

For the terminal, HDMI Type A is provided. Plus, a cable lock holder for the HDMI/USB cable is bundled to prevent issues such as unplugging on location. The LUMIX S5II and S5IIX support USB 3.2 Gen 2 for high-speed writing and readout. The LUMIX S5II and S5IIX are equipped with double card slots (UHS-II x 2). Users can choose the recording method from Relay Recording, Backup Recording, Allocation Recording. For the external microphone, a Φ3.5mm stereo jack and a headphone jack are provided.

Wi-Fi 5 GHz (IEEE802.11ac)*15 and 2.4 GHz (IEEE802.11b/g/n) effectively provide a- secure and stable connection on smartphones, tablets, and other devices on location for smooth remote control. The transmission speed of photo/video data is also increased by using the 5 GHz band. Compatibility with Bluetooth 5.0 (called BLE: Bluetooth Low Energy) enables constant connection with a smartphone or tablet with minimum power consumption. The settings of LUMIX S5II and S5IIX camera can be copied and transmitted wirelessly to other LUMIX S5II and S5IIX cameras when using multiple LUMIX S5II and S5IIX cameras. The LUMIX Sync application for iOS/Android devices allows remote control of the camera using a smartphone or a tablet via easy wireless connection. In addition to wireless control via a Remote Shutter DMW-RS2 (sold separately), application software LUMIX Tether enables tethered shooting via USB. Users can control the camera by connecting it to a PC via USB. It lets them view the image on a large PC screen while shooting.

The camera’s 2200mAh high-capacity battery DMW-BLK22 can be recharged either via AC or USB according to the users’ convenience. It also complies with USB PD (Power Delivery) when the corresponding Battery Charger DMW-BTC15 (sold separately) is used. Battery Grip DMW-BGS5 (sold separately) can be used in common with LUMIX S5.

Dressed in an exceptional matte black profile, the LUMIX S5IIX boasts an exceptional sleek, stylish design while the S5II takes on the authentic look as the predecessor.

The Panasonic LUMIX S Series boasts a total lineup of 14 lenses including new LUMIX S 14-28mm F4-5.6 MACRO (S-R1428) according to the purpose. Moreover, the L-Mount system provides the best assortment of full-frame lenses to choose from, for limitless spectrum of creative possibilities. Color shading correction helps improve image quality when other manufacturer’s lenses including old lenses are used with or without using a Mount Adaptor. Furthermore, LUMIX S5II and S5IIX memorize the name and its focal length of analog lenses such as anamorphic lenses or old lenses to provide suitable setting of camera’s in-body image stabilizer automatically when those lenses are used.

To enhance the performance of LUMIX S5II and S5IIX, the functions below will be available with future firmware update following the needs of customers.