Ricoh has announced the Pentax KF, the company’s newest APS-C DSLR camera for under $1,000. The new model is a replacement for the current Pentax K-70.

The biggest difference between with the KF is the articulating LCD display, which is now 1.04M dots, up from 921K dot display used in the K-70. Here are the details about the changes.

Here are the details: 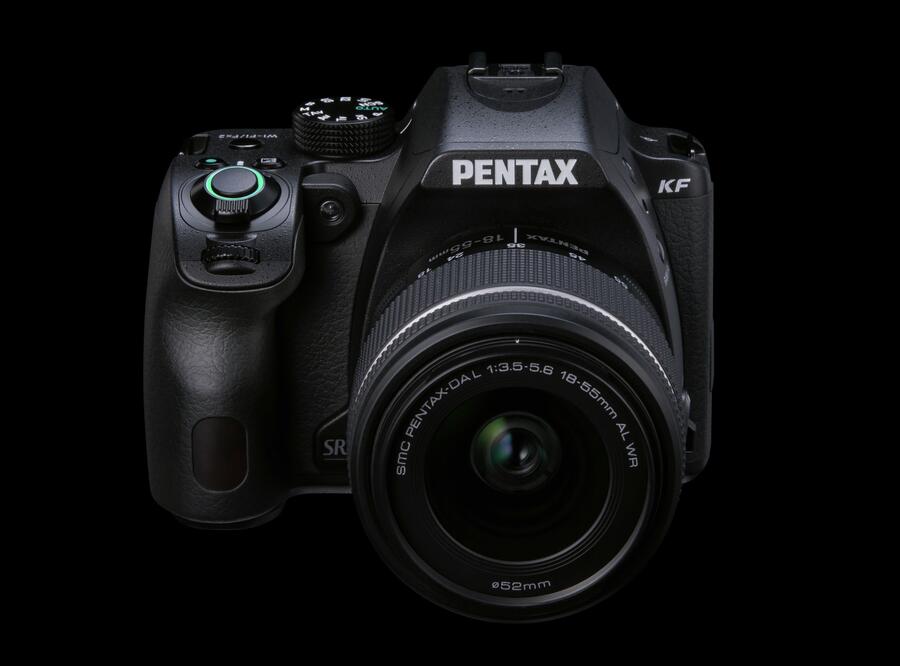 The PENTAX KF is designed to provide outstanding imaging performance in a rugged, highly portable body. It provides dependable, cold-proof performance down to temperatures as low as 14°F (-10°C), performing superbly in a wide range of weather conditions. While considered a mid-range model, the new camera incorporates an array of advanced functions and user-friendly features usually found only in higher-end models including a pentaprism-type optical viewfinder with a nearly 100% field of view and an in-body shake-reduction system with a 4.5-shutter-step compensation. It also provides the double e-dial system identical with top-of-the-line PENTAX models, as well as PENTAX-original shooting features, such as the Hyper Program system, which allows the user to instantly switch the exposure mode from Program to Aperture-priority or Shutter-priority without taking his or her eye off the viewfinder.

“With the PENTAX KF, even first-time SLR users can easily and effortlessly enjoy the benefits of SLR photography and explore the entire process of making digital images,” said Ken Curry, president, Ricoh Imaging Americas. “The PENTAX KF is an extension of our PENTAX K-70, sharing many of the same features and proven performance even in extreme outdoor conditions. As the only major manufacturer still producing true SLR cameras and building on our legacy and roots in SLR, high-quality still photography, we’re proud to fill the gap in the market and offer a high-quality, full-featured DSLR for less than $1,000.”

In addition to the standard black body camera, two special-edition color models — crystal blue and crystal white — will be available worldwide in a limited quantity of 700 units each. These will be available in late November only at www.us.ricoh-imaging.com for the manufacturer’s suggested retail price of $899.95. 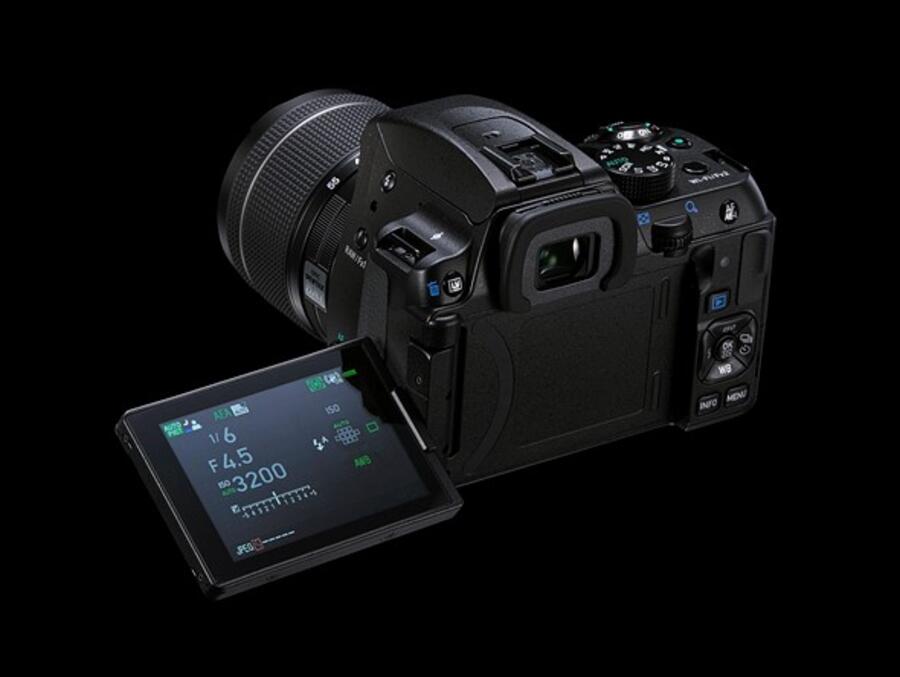 | Main Featues of the PENTAX KF |

1. Super-high-resolution with approximately 24.24 effective megapixels, even at ISO 102400

The PENTAX KF is a dependable performer even in such demanding settings as in the rain or at locations prone to dust and freezing temperatures. Its compact, easy-to-carry body features dustproof, weather-resistant construction with 100 seals throughout the body and outstanding cold-proof performance at temperatures down to 14°F (-10°C). To make it easy to ensure a firm hold on the camera body with a gloved hand, the grip, control buttons on the back panel and mode dials have all been designed and contoured for optimum operability, ideal for active outdoor shooting — such as when mountain climbing or hiking or capturing sporting events. The brightness level of the PENTAX KF’s outdoor-friendly LCD monitor can be quickly adjusted to the lighting level of a shooting location. The camera also features a red-lighted monitor display function, which facilitates viewing in dark locations for astrophotography.

Within its compact body, the PENTAX KF incorporates a glass prism finder featuring the same optics and coatings as those used in higher-level models. With its approximately 100% field of view and nearly 0.95-times magnification, the PENTAX KF’s viewfinder provides a large, clear view of the subject for quick, easy confirmation of focusing and framing.

4. Vari-angle LCD monitor for easy viewing from all angles

The PENTAX KF’s vari-angle LCD monitor allows the monitor to be positioned at the desired angle, making it easier to compose images in a wide variety of situations: high-angle shooting using outstretched arms, low-angle shots taken from ground level or astrophotography with the camera pointed upwards toward a star-filled sky. It also features unique, air-gapless construction, in which the air space between the high-definition LCD panel (with approximately 1,037,000 dots) and the protective cover has been filled with a special resin material to effectively reduce the reflection and dispersion of light for improved visibility during outdoor shooting.

With a panning shot, the sensor mechanism automatically detects the direction of the camera’s movement and controls the SR unit to produce the best image possible.

The PENTAX KF features the Pixel Shift Resolution System,* which captures four images of the same scene by shifting the image sensor by a single pixel for each image, and then synthesizes them into a single, composite image. Compared to the conventional Bayer system, in which each pixel has only a single color data unit, this innovative system obtains all color data in each pixel to deliver super-high-resolution images with greater color accuracy and much finer details than those produced by conventional APS-C-size image sensors. This system even provides a motion correction function,** which automatically detects a moving object during continuous shooting and minimizes negative effects during the synthesizing process in order to accommodate a wider range of scenes and subjects.

By applying microscopic vibrations to the image sensor unit at the sub-pixel level during image exposure, the PENTAX KF’s AA (anti-aliasing) filter simulator*** provides the same level of moiré reduction as an optical AA filter. Unlike an optical AA filter, which always creates the identical result, this innovative simulator lets the user switch the AA filter effect on and off, as well as to adjust the level of the effect. This means that the ideal effect can be set for a particular scene or subject based on the current photographic conditions.

Since the PENTAX KF’s image sensor unit is designed to tilt in all directions, it provides a host of additional, special shooting functions, including ASTROTRACER, which simplifies advanced astronomical photography in combination with the optional O-GPS2 GPS Unit; and Auto Horizon Correction and Extra Sharpness functions.

* When using this system, the user is advised to stabilize the camera firmly on a tripod. When a moving subject is captured in the camera’s image field, its image may not be reproduced clearly, either in part or as a whole.
** The movement may not be sufficiently corrected when the object is moving in a certain direction and/or pattern. This function does not guarantee that the movement is properly corrected with all subjects.

*** This function works most effectively with a shutter speed of 1/1000 second or slower. This function may not be combined with some shooting modes, including the Pixel Shift Resolution system.

The PENTAX KF employs the Hybrid AF system during Live View autofocus operation. By positioning a contrast-detection AF sensor with superior focusing accuracy and a phase- matching AF sensor on the image sensor’s surface, this innovative hybrid system optimizes the benefits of both AF systems to assure high-speed, pinpoint AF focusing on the subject.

The PENTAX KF features the high-precision SAFOX X AF sensor module, which assures responsive, dependable autofocus operation. With its 11 sensors including nine cross-type sensors in the middle, this AF module assures pinpoint focus on the subject at a minimum brightness level as low as -3 EV. It also assures outstanding AF tracking performance with moving subjects, enabled by advanced features such as the Select-area Expansion function, which automatically refocuses on a moving subject after it moves away from the initial point, with the help of the neighboring points; and an AF Hold function that maintains the initial in-focus point even when the module loses sight of the subject.

8. An array of image processing functions for diversified photographic expression

The PENTAX KF provides the PENTAX-developed Custom Image function, which lets the user process an image with the desired finishing touch to express the creative intention, or to suit the particular scene. This function provides 14 Custom Image modes, including: SATOBI, which reproduces the colors to resemble those of pictures in the 60s and 70s, with cyan- tinged blues, subdued yellows and faded reds; Bleach Bypass, which recreates the distinctive, high-contrast look of movie film; and Cross Processing, which adds fantastic, unusual colors to captured images. In combination with PENTAX Limited-series lenses, which are popular for their distinctive image renditions, the PENTAX KF also provides special-edition Custom Image modes KYUSHU and KATEN.

9. A host of interval shooting functions

The PENTAX KF provides a host of advanced interval shooting functions, including: 4K- resolution Interval Movie, which allows recording a series of still images at a fixed interval and then linking them together into a single 4K-resolution movie file; Star Stream Movie, which enables recording the traces of stars or illuminations on a 4K-resolution movie file; and Interval Composite, which synthesizes a composite image with a choice of three synthesis modes (average, additive and comparative).

The PENTAX KF provides a host of wireless LAN (Wi-Fi) functions to support operations using smartphones and tablet computers. By installing the dedicated Image Sync application on a smartphone or tablet, the user can remotely check the Live View image, capture still images, and adjust such camera settings as aperture, shutter speed and ISO sensitivity to the desired level through the mobile device. It is even possible to download captured images onto a mobile device for easy uploading onto social networking service websites.

Ricoh Imaging Americas Corporation is a subsidiary of Ricoh Company, Ltd. Ricoh is empowering digital workplaces using innovative technologies and services enabling individuals to work smarter. For more than 85 years, Ricoh has been driving innovation and is a leading provider of document management solutions, IT services, commercial and industrial printing, digital cameras and industrial systems. Headquartered in Tokyo, Ricoh operates in approximately 200 countries and regions.

Asahi Optical Joint Stock Co. was founded in 1919 and launched its first SLR camera in the 1950s under the PENTAX name. Over 100 years later, now as part of the Ricoh Group, Ricoh Imaging continues to produce the heritage-rich, award-winning PENTAX line of DSLR cameras, lenses and sport optics equipment. Ricoh’s offering of stylish and compact digital cameras are known for their wide-ranging, unique set of features.