In addition to the new 600mm Z lens, Nikon announces pricing, availability for its MC-N10 Remote Grip for Z Series cameras. The Nikon MC-N10 remote grip for the Nikon Z mount system now available for pre-order at Adorama, B&H Photo, Amazon. The Nikon MC-N10 Remote Grip will be available in ‘late November 2022’ for a suggested retail price of $429.95.

The MC_N10 features an ARRI-compatible rosette mount to connect to common video rig setups. It connects to Nikon Z-mount cameras via the USB-C connection and features an array of toggles, dials and buttons for controlling the camera without needing to touch the camera itself.

The grip will run for up to 12 hours on two AA batteries. It’s weathersealed against the elements (Nikon says similar to that of the Z9) and will work down to −10°C (14°F). More details can be found in the press text below : 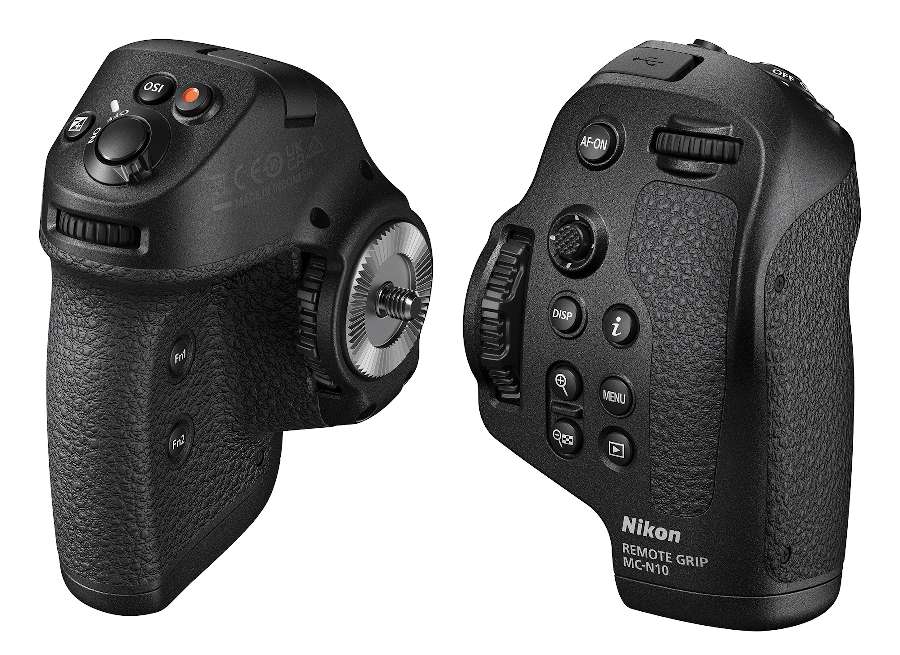 (Nikon) is pleased to announce the release of the MC-N10 Remote Grip for mirrorless cameras for which the Nikon Z mount has been adopted. Development of this product was announced on April 14, 2022.

The MC-N10 is a remote grip that enables control over mirrorless cameras*1 for which the Z mount has been adopted, via a wired connection. Adoption of ARRI rosette specifications, which provide excellent compatibility with a wide variety of accessories, allows for attachment of the MC-N10 to various video-recording accessories using an optional rosette adapter. Further, the angle at which it is fixed when mounting can be flexibly adjusted to suit the user’s shooting position and stance. In addition, attaching the MC-N10 to a tripod’s pan bar or a gimbal allows for use of the camera even in situations where the user moves the camera while zooming in or out, and in situations where they want to adjust settings, including exposure, and control autofocus without touching the camera in an effort to avoid camera shake. The MC-N10 increases the efficiency of video recording with a small crew, or even a single videographer, allowing them to better concentrate on creating their video works.

In addition to a compact and lightweight design that does not impair mobility, the shape of the MC-N10 and button layout are based on those of the Nikon Z series. This enables intuitive operation, even when switching between the camera body and the MC-N10. What’s more, click-less dials have been adopted for smooth operation and reduced dial operation sounds accidentally recorded while filming. As the MC-N10 connects to the camera via a USB cable (Type C connector), radio-wave interference and crosstalk are not a problem. When powered by AA batteries, the MC-N10 supports extended recording for up to 12 hours*2. The MC-N10 also supports the same superior dust- and drip-resistant performance*3 as the Nikon Z 9, as well as cold tolerance down to -10°C/14°F, allowing for its use in harsh environments and conditions.

Nikon will continue to contribute to the development of imaging culture, with the hope of expanding the possibilities for imaging expression, for both videos and stills.

*1As of November 2, 2022, the MC-N10 Remote Grip is compatible with the Z 9, Z 7II, and Z 6II. Be sure to update camera firmware to the latest version.
*2When two 1.2V AA rechargeable Ni-MH batteries are used. Battery endurance may vary depending on batteries used, operating environment, usage conditions, and storage conditions.
*3Thorough dust and drip resistance is not guaranteed in all situations or under all conditions.
* Usage example of the MC-N10.