Fujifilm officially announced the new Fujifilm Instax Mini Evo hybrid instant camera. The US price is $199.95 and it will be released in February 2022.

The company describes it as a new Instax flagship that has been “designed with a premium and classical touch;” and it has several retro elements including top-mounted dials and a print control that works like a film advance lever.

The Mini Evo also works as an Instax printer, meaning you can print out pictures from your smartphone wirelessly. In the opposite direction, Fujifilm has added a new feature to let you save printed Mini Evo photos to your phone complete with embedded Instax frames, so you can share them as digital Instax snaps. 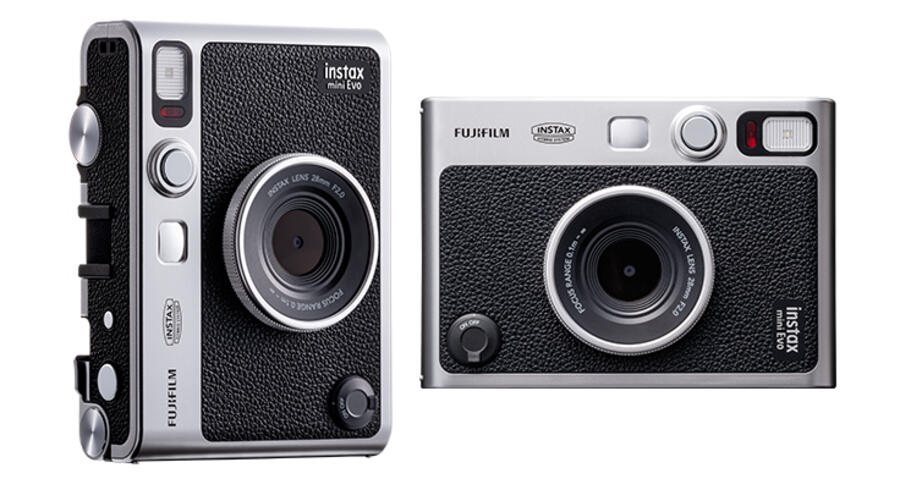 – a flagship model of “instax” series in a classical design, comes with 100 combinations of shooting effects for expressing emotions
– new Mini-format film “Stone Gray” available with an exquisite frame design

TOKYO, November 17, 2021 – FUJIFILM Corporation (President and CEO, Representative Director: Teiichi Goto) is pleased to announce the launch of the hybrid instant camera “instax mini Evo” (mini Evo), which supports card-size films. The new “mini Evo” is a flagship model of the “instax” series of instant cameras, which allow users to enjoy photo prints on the spot. The new “mini Evo” will be in stores in Japan on December 3, 2021 and in the other countries and regions from December or later.

With a hybrid instant camera, users can review photos captured on the device via the LCD monitor on the rear panel of the camera and choose images they want to print. This convenience has led to global popularity of Fujifilm’s hybrid instant cameras including “instax mini LiPlay.” The new “mini Evo” is a hybrid instant camera that features more advanced functions, operability, print quality and apps than ever before. Versatile shooting effects, available on the “mini Evo” can be freely combined to deliver 100 combinations of effects for users to express and convey their emotions through instax prints. The new model, designed with a premium and classical touch, is the first instax camera equipped with a print lever, lens dial and film dial. These allow users to choose shooting effects with the dials and print by pulling the lever, offering the joy of creating photographic arts with analog operations.

To be released on the same day is the mini-format film “Stone Gray,” which has a gray frame accentuated with metallic silver to give off a sense of luxury, adding an exquisite touch to photos taken with the “mini Evo.”

The main features of Mini Evo include:

Selfies, Storage, and More
The Mini Evo camera also features a 3-inch LCD screen on the back of the camera to allow users to select images, add frames, edit, print, and adjust image settings, supported by a built-in Lithium Ion battery which enables the camera to print up to 100 images per charge, depending on the specific use case. A Micro SD card slot ensures there’s plenty of room to store images for later enjoyment, while the selfie mirror helps users nail selfies every time.