The bright standard prime optic is the best 85mm lens for Sony A7 series cameras! The lens achieved a score of 49 and showed high sharpness and excellent control of lateral chromatic aberration.

According to DxOMark test, the lens has optimum performance across the image field. This is achieved at f/5.6, but performance is also excellent when opened up one or two stops. 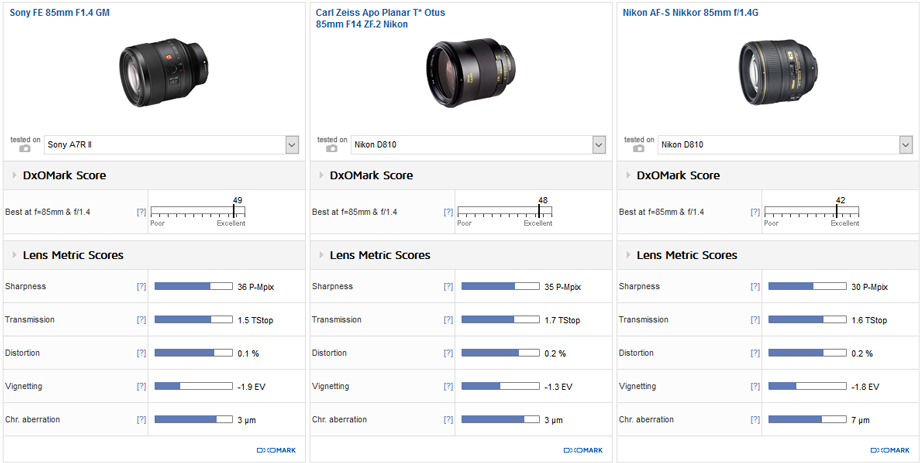 After the somewhat mixed results for the Sony FE 24-70mm f2.8 GM on the A7R, the second lens in the company’s new GM series. The FE 85mm f1.4 GM, has achieved a much more convincing performance, albeit on the latest-generation Sony A7R II with its new 42-Mpix sensor. Indeed, on the newer Sony body, the 85mm f1.4 is rated at a level similar to the Zeiss Otus 85mm f1.4 (on a 36-Mpix Nikon D810), which lens is considered the benchmark in today’s optics for full-frame cameras. The Batis remains an option, given its competitive price and performance. But that takes nothing away from the outstanding performance of the Sony FE 85mm f1.4 GM.

The FE 85mm f/1.4 GM ($1,798.95 – Amazon | B&H | Adorama) has an 11 blade circular aperture (the most offered in an α lens) for smooth bokeh, Nano AR coating for reducing flare and ghosting, a ring drive SSM motor, dust and moisture resistance, and an aperture ring with on/off switchable click stops (for smooth adjustments during video recording).