Nikon’s Image Space is the space to share images and impression to them is a free photo sharing service, open to anyone who enjoys taking photos or recording movies.

With this renewal, Nikon made “NIKON IMAGE SPACE” easier to use and more practical. See whole details at the press text below. 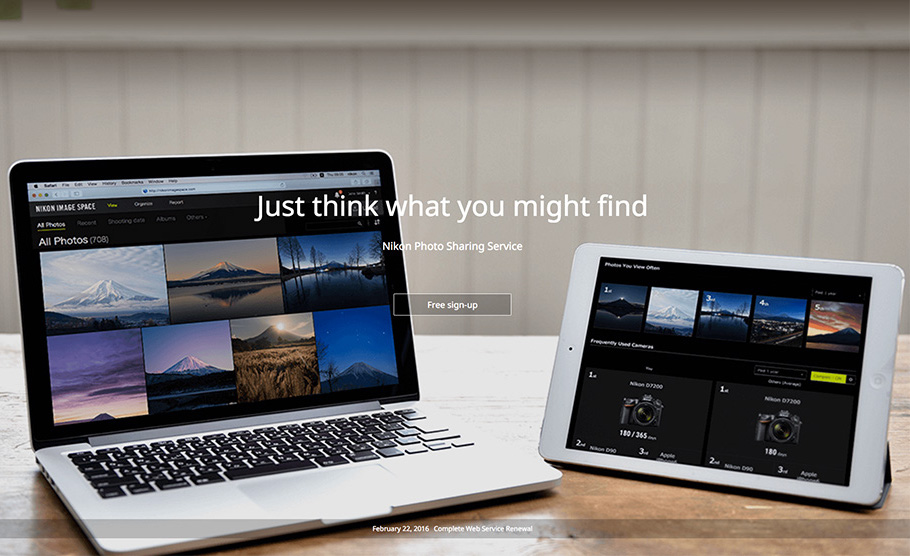 TOKYO – Nikon Corporation is pleased to announce the release of its renewed online photo sharing service, “NIKON IMAGE SPACE”. This latest version of the service was launched on February 22, 2016.

Originally launched in January, 2013, “NIKON IMAGE SPACE”, the name of which expresses the fact that it is a space for sharing and appreciating images, is a free online image sharing and storage service open to anyone who enjoys taking photos or recording movies.

With this renewal, we have made “NIKON IMAGE SPACE” easier to use and more practical.

We have equipped “NIKON IMAGE SPACE” with three new modes that allow users to enjoy photos from a variety of angles. “View” mode supports intuitive browsing of photos, and the new “Report” mode enables analysis of aspects such as photographic tendencies from shooting information for uploaded photos and feedback on shared photos. “Organize” mode (computer version only), also available prior to the renewal, has been improved to enable easier and more natural photo organization with a left-and-right pane layout.

Photo sharing functions have also been improved. Users can specify a period of time for which images are shared (share duration), and the service has also been equipped with a function for receiving applause from those with whom images are shared. In addition to the ability to set the share duration, images can also be password protected. What’s more, a browsing function that enables automatic display of photos to which the same tags have been attached, much like an album, has been added.

We plan to offer collaboration with SnapBridge, our new app announced in January, 2016, that enables constant connection between a Nikon digital camera and a smart device using Bluetooth® low energy.*1 This will enable automatic upload of an unlimited number of 2-MP images to “NIKON IMAGE SPACE” from SnapBridge with a registered Nikon ID*2.

*1We will announce the start of collaboration with SnapBridge once the schedule has been determined.

Nikon will continue to offer ways of enjoying digital photos and movies with the development of new functions for the “NIKON IMAGE SPACE” service and further improvements to the service.