The world’s first 4K UHD wide-angle CJ12ex4.3B portable lens is the first in a new line of 4K 2/3″ broadcast lenses for use with 4K broadcast cameras featuring 2/3-inch sensors.

The CJ12ex4.3B portable broadcast lens is scheduled to be available in December 2015. 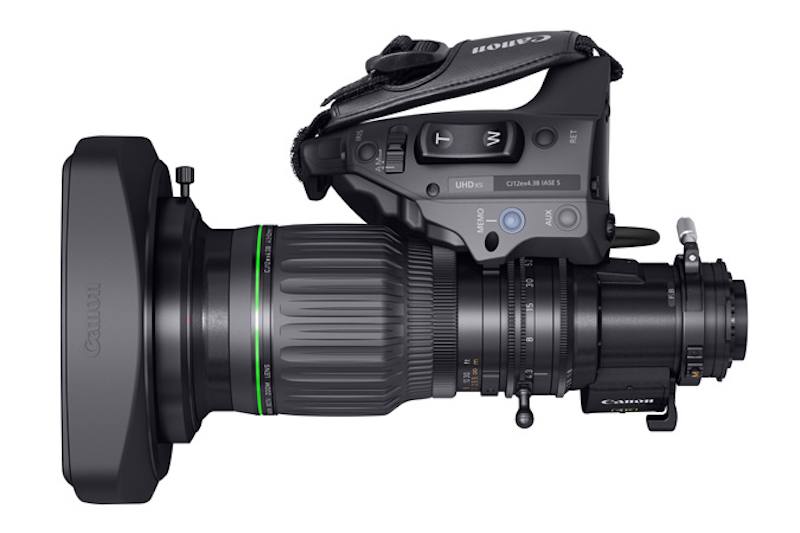 This portable wide-angle lens provides the optical excellence needed for 4K broadcast production. Its 4.3mm wide angle (96.3 degree horizontal angle of view) and minimum object distance of 30 cm are both the best of its class in the world*. A built-in 2x extender allows more telephoto operation without sacrificing 4K image quality.

This wide angle lens supports framing of scenes containing large amounts of image detail — for example, a wide end zone-to-end zone shot. Editors can then select a 1920 x 1080 crop from within the 3840 x 2160 camera original with full HDTV image quality. Alternatively, the 4K UHD camera video can be downsampled to HDTV offering enhanced resolution by virtue of that supersampled original. 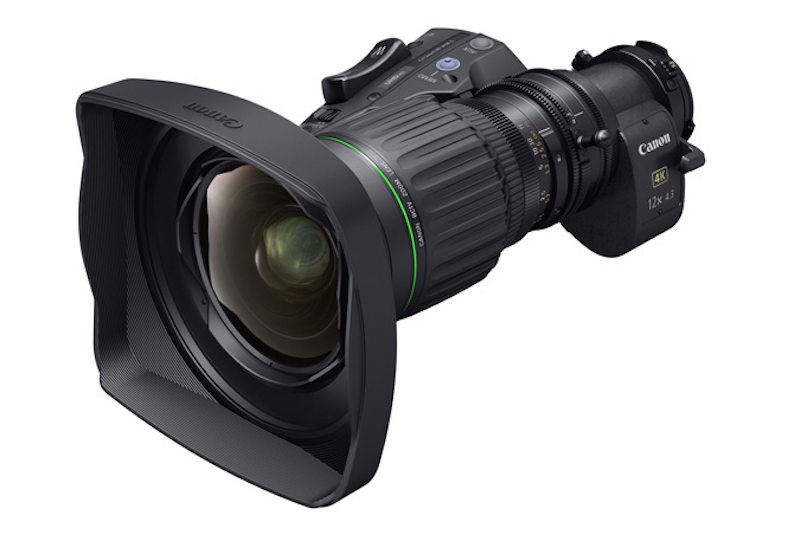 The form factor for production shooters will be very similar to shooting with Canon’s HD lenses in size, weight and controls. Its light weight of 4lbs, 10oz. and compact size make it ideal for shoulder-mounted ENG applications.

Three 20-pin connectors, capable of reading out the high-precision position information of the zoom, focus and iris are provided as a standard feature. Virtual operations are also available in the full servo mode, and use of a 16-bit absolute value encoder in the digital drive unit helps eliminate the need for any initialization, meaning users can simply turn on the camera and begin shooting. The lens is also compatible with standard HD zoom and focus demand controls.

Canon is also developing a new longer-zoom 4K portable lens as an important addition to the new 4K 2/3-inch broadcast lens lineup. Like the new CJ12ex4.3B wide angle zoom lens, this new 4K portable lens, under development, will realize a high level of imaging performance while also featuring a weight and body size that achieve the same level of mobility as conventional portable HDTV zoom lenses. Supporting both indoor and outdoor use for a variety of applications, including sporting events, live telecasts, serial dramas and television commercials, the new 4K portable zoom lens will enable shooting across a range of focal lengths, from the wide-angle capture of entire sets to close-ups of distant subjects, in either 4K or HD resolution.

* Among portable 4K broadcast lenses for 2/3-inch imager format as of August 25, 2015
** This device has not been authorized as required by the rules of the Federal Communications Commission. This device is not, and my not be offered for sale or lease, or sold or leased, until authorization is obtained.