The Speed Booster ULTRA 0.71x has a magnification of 0.71x, and so it effectively reduces the crop factor of mirrorless Micro Four Thirds mount cameras from 2.0x to 1.4x. 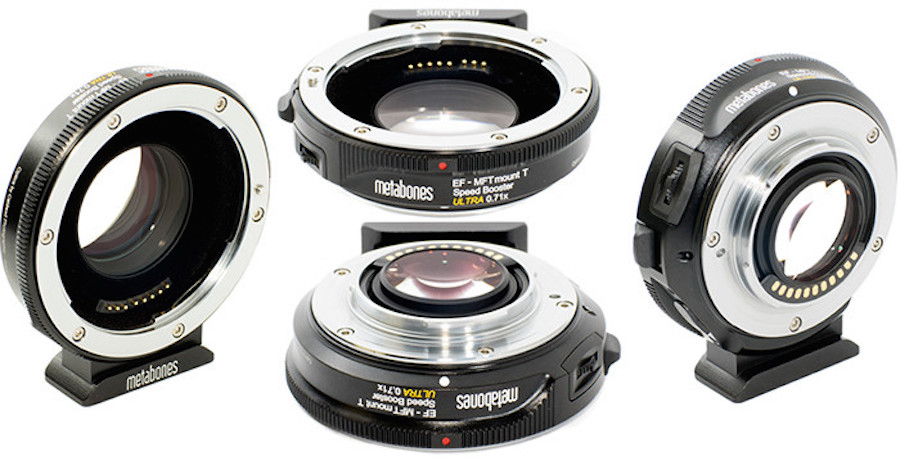 Like the revolutionary original Metabones Speed Booster® announced in January 2013, the Speed Booster ULTRA m43 has a magnification of 0.71x, and so it effectively reduces the crop factor of mirrorless Micro Four Thirds mount cameras from 2.0x to 1.4x.  However, the new ULTRA design makes very effective use of exotic materials at the furthest limit of glassmaking technology, and as a result is almost perfectly corrected for use with all fullframe SLR lenses regardless of aperture.  The Speed Booster ULTRA m43 will also work extremely well with many DX and APS-C format lenses provided the image circle of the lens is large enough.  Optical performance of the new Speed Boosters is so good that the MTF of any lens attached to it will be improved.  Even the latest generation of ultra-high performance SLR lenses such as the Zeiss Otus series can be improved by adding a Speed Booster ULTRA m43.

Figures 2 through 4 below show MTF at 10, 20, and 40 lp/mm as a function of image height for output apertures of f/0.9, f/1.0, and f/2.0, respectively1.   At the maximum aperture of f/0.90 (i.e., with an f/1.2 master lens) the sharpness and contrast are extraordinary across the entire image circle.  At just one-third stop down to f/1.0 the performance is equal to or better than the best photographic lenses used at their optimum apertures.  An additional stop down to f/2.0 yields performance that is rarely encountered in photographic optics.  In practice, what all of this means is that the new Speed Boosters will always enhance and never degrade the performance of the attached master lens.

And other aspects of optical performance haven’t been sacrificed in order to obtain high MTF, either.  Figure 5 shows that there is less than 1 stop of corner illumination falloff even wide-open at f/0.9. There is no vignetting at all after the output aperture reaches f/2.82.  Figure 6 shows that rectilinear distortion added by the Speed Booster ULTRA m43 is negligible at less than 0.7%. The charts shown in Figures 2 through 6 below show the optical performance of the Speed Booster ULTRA m43 when mounted behind an ideal “perfect” lens.

Like all Metabones Speed Boosters, the Speed Booster ULTRA m43 is optimized to correctly account for the camera’s filter stack located near the sensor surface3.  This is especially critical at the extremely large apertures made possible by Speed Booster technology.  As a result of this careful optimization, an enormous range of full-frame optics, ranging from vintage film lenses to the latest digital designs, will function flawlessly when adapted to Micro Four Thirds camera bodies.