Atomos has released AtomOS6.4 Shogun firmware update for their Shogun external recorder/monitor, which enables users of the Sony FS700 and FS7 to take the RAW 4K-DCI feed from the SDI output on the camera and record directly to 4K-DCI ProRes or DNxHR.

Other new features include anamorphic de-squeeze, pre-roll recording, custom time-lapse capture, additional LUT capabilities, playlist generation, expanded metadata tagging and the activation of the Genlock terminal on the back of the Shogun to allow for synchronised playout and playback.

AtomOS6.4 firmware update can be downloaded from the Atomos website. 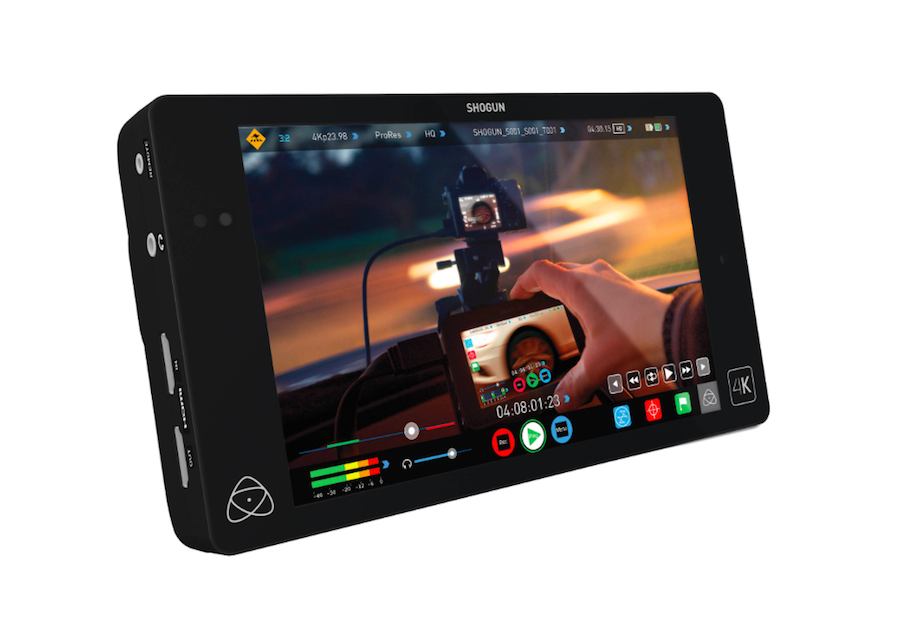 Melbourne, Australia – 30th June: Since the Shogun launched in late 2014, Atomos has constantly kept users updated with free features, adding significant value to the already affordable all-in-one 4K/HD monitor-recorder. The AtomOS6.4 released today adds some of the most anticipated features for users to date including;

“We have unleashed thousands of dollars of value for free,” says Jeromy Young CEO and co-founder of Atomos. “Features like RAW transform the FS700 from a HD camera to a 4K camera with accurate colors and real conversion to REC709 for the best ProRes and DNxHR recording, the Anamorphic de-squeeze adds even more functionality to the Panasonic GH4, Playlist converts the Shogun into an affordable play out server on set and time lapse gives a creative edge to all of our users in the field.”

The AtomOS6.4 update is available for free download from http://www.atomos.com/support. The features added to the Shogun are included here in full;

1. FS700 & FS7 4K-DCI RAW to ProRes/DNxHR record
Users can take the RAW 4K-DCI feed from the SDI output on the Sony FS7 and FS700 and record direct to 4K-DCI ProRes or DNxHR. The linear RAW feed can be recorded as Slog2, Slog3 or Rec709 and can support 24/25/30p resolution. For the army of FS700 users in the field this is the feature they have been waiting for, converting their HD camera into a 4K powerhouse.

3. Pre-roll recording of 8s HD, 2s 4K
With pre-roll activated the Shogun is continually cache recording – up to 8s for HD and 2s for 4K. Perfect for capturing action sports or long wildlife shoots, ensuring you always get the shot even if you hadn’t hit record yet. Works in all modes including RAW.

4. Custom time lapse recording
One of the most creative features added is video time lapse. With this feature users have complete control over their unique time lapse style with the ability to adjust the number of frames, time between capturing the next frame, total record time and clip playback length. The user interface has been well thought through to make the process easy and with the ability to set multiple steps, add a smooth transition and even schedule the recording time, capturing the perfect time lapse sunset is now a much easier task.

5. LUTs able to be applied on output, in recording, on screen and split screen
Since February, Shogun users have been able to upload their own LUTs in a “.cube” file format to review and measure the effect on the monitor before recording. Now in OS6.4, additional LUT capability has been added with the ability to view the LUT on the output, on the screen, bake it in the recording and even view in half screen mode to see the direct result of the LUT on the final image.

6. Expanded meta data tagging
We have expanded the meta data capability of the Shogun to allow for on the fly tagging wither during recording or during review in playback. The 10 meta data tags available (Favorite, Reject, Talent 1, Talent 2, Over Exposed, Color Correct, Bad Audio, Cut Away, Close up, Wide shot) allow for key word search in FCPX and can be transferred across to Adobe and AVID using readily available online tools.

7. Genlock activated
The Genlock terminal on the back of the Shogun has been activated to allow for synchronised playout and playback.

8. Playlist generation
The ability to record, playback and review quickly on set has been an integral feature of Shogun and now with playlist functionality the process for reviewing rushes and favourite scenes on set is easier than ever. Play all movies in recorded order, or hand select a playlist for playback in any order – either your choice of multiple clips, just the Favorite sections of a clip or a combination of both. This functionality makes the Shogun one of the most affordable 4K play out server solutions available on set.