American photographer John Moore has been named as the 2015 Sony World Photography Awards’ L’Iris d’Or / Professional Photographer of the Year. The winning work “Ebola Crisis Overwhelms Liberian Capital” is a hard-hitting series of images that cut to the heart of this human tragedy.

Additionally, Sony and the WPO have revealed the grand winners of the Open, Youth, and Student categories. 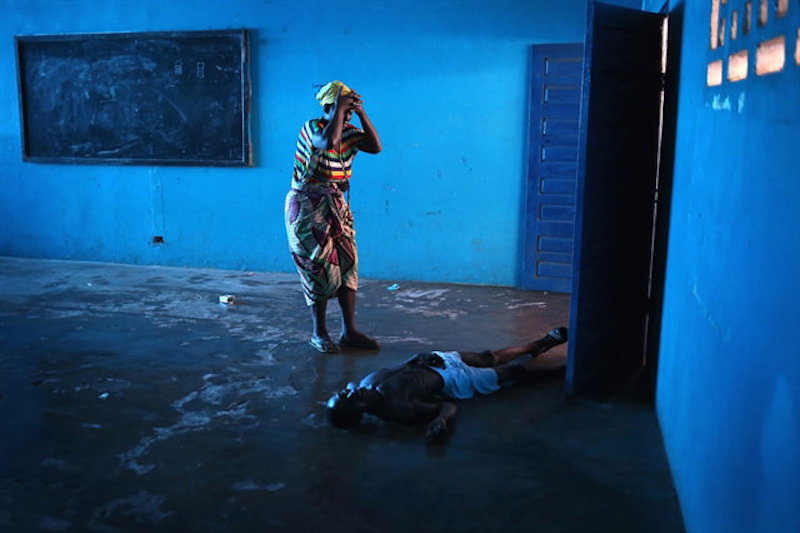 Chosen from the winners of the awards’ thirteen professional categories, the winning work “Ebola Crisis Overwhelms Liberian Capital” is a hard-hitting series of images that cut to the heart of this human tragedy.  Moore is a Senior Staff Photographer and Special Correspondent for Getty Images, and his winning photographs have been universally credited for the early exposure of the scale of the Ebola epidemic in Monrovia, the capital of Liberia.

Talking at the awards Moore said: “I collect this award tonight in recognition of all the photographers working in difficult and dangerous places right now, and tomorrow. I am very grateful to the Liberians who allowed me to photograph them on their most difficult days. I will always be grateful.”

Moore is based in New York and has photographed in more than 70 countries. He is a past recipient of the Robert Capa Gold Medal, been named Photographer of the Year by both Pictures of the Year International and the National Press Photographers Association and has been recognised four times by World Press Photo.

The photographer was presented his award along with a $25,000 (USD) cash prize and the latest Sony digital imaging equipment at a gala ceremony held in London attended by photography’s industry leaders.

In a collective statement, judges Xingxin Guo, Xinhua News Agency Image Centre, China; Jocelyn Bain Hogg, photographer, UK; and Oliver Schmitt, Spiegel Online, Germany, said of the work: “John Moore’s photographs of this crisis show in full the brutality of people’s daily lives torn apart by this invisible enemy. However, it is his spirit in the face of such horror that garners praise. His images are intimate and respectful, moving us with their bravery and journalistic integrity. It is a fine and difficult line between images that exploit such a situation, and those that convey the same with heart, compassion and understanding, which this photographer has achieved with unerring skill. Combine this with an eye for powerful composition and cogent visual narrative, and good documentary photography becomes great.”

Now in its eighth year, the Sony World Photography Awards annually presents the world’s best contemporary photography across a range of genres. Free to enter and open to photographers of all abilities, it is an authoritative voice in the photographic world and attracts both emerging talent and established artists.

The awards’ international judging juries are comprised of esteemed industry experts and the competition offers incredible exposure, credibility and recognition not only to its winners, but also those on its shortlist. The 2015 awards attracted record-breaking entries, with 173,444 images submitted from 171 countries, confirming its position as the world’s biggest photography competition.

The winners, plus the 2nd and 3rd placed photographers, of thirteen Professional categories were also announced today.

From across the world and covering a range of topics, the winning works each showcase the very best contemporary photography in their genre. The winners are:

OPEN PHOTOGRAPHER OF THE YEAR

Amateur German photographer Armin Appel was named the overall Open Photographer of the Year and received $5,000 for his image “Schoolyard”. Chosen from nearly 80,000 entries to the Open competition, the image was taken while Appel was paragliding and shows the vibrant landscape of Biberach an der Riss, Germany. The image won the overall commendation amongst nine other Open category winners who were announced on 31 March. A panel of experts from the World Photography Organisation, chaired by Sam Barzilay, Creative Director of United Photo Industries (USA), judged the Open competition.

Renowned Magnum photographer Elliott Erwitt was honoured at the awards with the Outstanding Contribution to Photography prize.

The photographer is noted worldwide for his candid and often ironic black and white images capturing everyday life. The prize recognises Erwitt as a modest master who approaches both his commercial and personal work with wry and witty visual brilliance.

An intimate show celebrating a combination of Erwitt’s most familiar and lesser known work from across his 60 year career will be presented at Somerset House, London as part of the Sony World photography Awards exhibition.

YOUTH PHOTOGRAPHER OF THE YEAR

Nineteen-year-old student Yong Lin Tan from Malaysia was awarded the Youth Photographer of the Year title. Open to photographers aged 19 and under and judged on a single shot, the atmospheric winning image was taken in the back alley of the photographer’s grandmother’s house in Kedah, Malaysia. It was chosen from the three Youth category winners who were announced on 31 March. 6,675 entries were received to the Youth competition in total.

STUDENT PHOTOGRAPHER OF THE YEAR

Russian photographer Svetlana Blagodareva from Saint Petersburg State Polytechnic University beat nine other shortlisted students from around the world to collect the Student Photographer of the Year title. Her prize is €35,000 worth of Sony photography equipment for her university. The Student Focus programme is one of the world’s largest international programmes for photography students and works with 230 institutions across six continents.

All the winning and shortlisted images will be exhibited at Somerset House, London from 24 April – 10 May along with a dedicated curation to Outstanding Contribution to Photography recipient, Elliott Erwitt. Running alongside is our guest exhibition, #FutureofCities – a social documentary photography project examining the mass urban shift of the global population in our major cities presented by Sony’s Global Imaging Ambassors and Panos Pictures. In addition, for the first time visitors to the exhibition will be able to buy prints of the photographs on display courtesy of the hub from theprintspace.

The exhibition is accompanied by a book of the winning and selected shortlisted work. It is available to buy from http://www.worldphoto.org.

Galleries of all the winning and finalist images can be seen at www.worldphoto.org