This adapter allows M42 screw mount lenses to be mounted on Fuji X cameras while altering their magnification by a factor of 0.762x and improving their aperture speed by a full stop.

The reduced magnification enables users to partially regain the angle of view lost by mounting a full-frame lens on a camera with an APS-C sized sensor. In other words, the M42 -Fuji X Lens turbo adapter (ver II) effectively reduces the crop factor of Fujifilm X series compact system cameras from 1.5x to 1.14x.

The optical construction comprises 4 lens elements in 4 groups, including 1 extra-low dispersion element which helps reduce the chromatic aberrations on the image. The adapter has a price tag for $149 and available from their website. 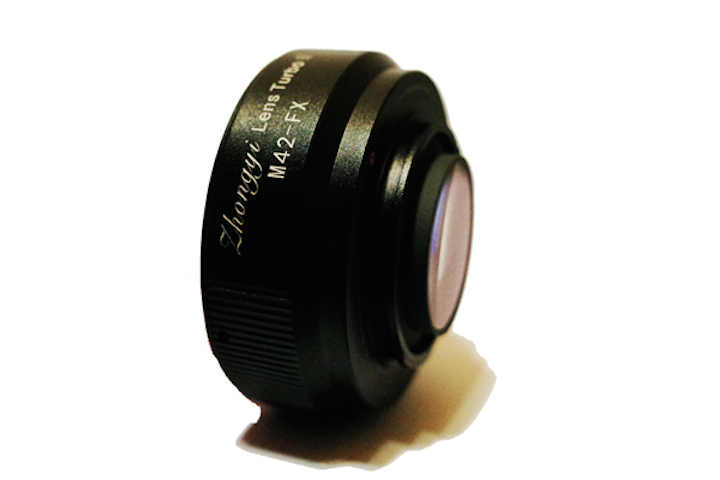 Similar to the previous Zhongyi Lens Turbo (ver II), the new M42-Fuji X lens turbo adaptor features a structure of 4 lens elements in 4 groups, including 1 extra-low dispersion element which helps in reduce the chromatic aberrations on the image. The angle of view of the camera lenses will be increased by 0.762x and the max. aperture will be improved by 1-stop. Version II of the lens turbo adapter has a complete different optical design from version 1 and a much improved coating. And the optical performance upgrades tremendously.

Other conversions of Zhongyi Lens Turbo Adapters (ver II) for Fuji X cameras are going to be released in 2015. Purchase can now be made via ZY Optics official website (http://www.zyoptics.net/) or authorized resellers. Suggested retail price is USD 149.