The Ricoh G800 is the successor to 2010’s G700 and is a new heavy-duty digital compact camera with a back-illuminated, 16-megapixel CMOS sensor, capable of producing sharp images even in low light.

Ricoh G800 features also include a 28-140mm equivalent lens, a 3-inch LCD screen with a resolution of 920K dots, an electronic level gauge, and a wide array of security functions. 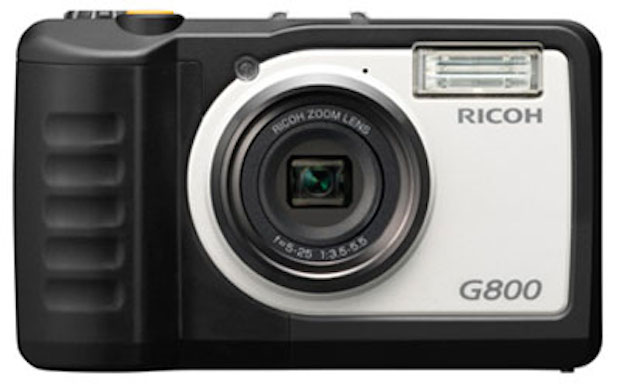 The new RICOH G800 is the successor to the acclaimed G700 (released in September 2010). Featuring a back-illuminated, 16-million pixel CMOS image sensor capable of bright low-light exposures, it can record detailed photographs and Full HD movies even in poorly-lit working environments. Like its predecessor, it can be used at depths of up to 5m (for up to 2 hours) and withstand drops of up to 2m in tests conducted according to American military standards.

The RICOH G800 also features improved password protection. Protection that could formerly be applied to only one function at a time (for example, to restrict access to internal memory) now can be applied to multiple camera functions. Ricoh has added support for separate administrator and user passwords, so that in addition to preventing on-site handling errors and unauthorised viewing of photographs, security settings can be fine-tuned separately for administrators and on-site workers according to how each uses the device. And the RICOH G800 can be used in even more working environments than its predecessor—not only in outdoor situations such as during disaster relief, but on construction sites as well as medical and production facilities that require equipment that can be washed and disinfected. Supplied accessories include a rechargeable battery, battery charger, USB cable, and neck strap.

The RICOH G800 features a back-illuminated CMOS image sensor for bright pictures of dim worksites and other poorly-lit scenes. The effective pixel count of 16 million (an increase over the 12.1 million of its predecessor) ensures that details show clearly even after pictures are cropped.

Rugged enough for the harshest working environments, with water, dust, and impact-resistance and improved chemical resistance

Varied functions for a variety of situations