GoPro has officially announced the HERO4 Black and Silver cameras with the new entry-level Hero model.

The GoPro Hero4 Black Edition is the company’s first Hero to offer a cinema-quality 4K video mode with support for a 30 frames per second (fps).

The GoPro HERO4 Silver is the first Hero with a touchscreen and delivers the same professional image quality as HERO4 Black. Hero4 Silver edition video capture capabilities max out at 2.7K at 30fps, 1080p at 60fps and 720p at 120fps. The HERO 4 Silver Edition is also arriving on October 5th, and costs $400.

The entry-level GoPro Hero marketed as the “perfect entry-level action camera”. It records full HD videos at 30fps and 720p videos at 60fps. The GoPro HERO, will cost only $130 and arrives on October 5th.

GoPro HERO4: The Adventure of Life in 4K

GoPro Introduces HERO4: The Most Powerful GoPro Lineup, Ever

SAN MATEO, CALIF. (September 29, 2014) – GoPro, Inc. (NASDAQ:GPRO), enabler of some of today’s most immersive and engaging content, today unveiled HERO4, the highest performance line of capture devices the company has ever made. HERO4 is available in two editions, HERO4 Black at MSRP $499 and HERO4 Silver at MSRP $399. GoPro’s Emmy® Award-winning imaging technology combines with enhanced ease-of-use and powerful new features such as 4K30, 2.7K50 and 1080p120 video capture (Black) and built-in touch display convenience (Silver), to make it easier than ever for consumers to self capture and share stunning, professional quality content of their favorite experiences.

HERO4 Silver delivers the same professional image quality as HERO4 Black less some of the higher performance video capture modes including 4K30, 2.7K50 and 1080p120. HERO4 Silver includes a brilliant built-in touch display for those who value convenience and ease-of-use over the no-holds-barred performance of the HERO4 Black.

The new HERO4 line will be available October 5 on GoPro.com and at select retailers worldwide.

“For the past twelve years, our passion has been to make it easy for people to self-capture jaw dropping, professional quality footage of themselves engaged in their favorite activities,” said GoPro Founder and CEO, Nicholas Woodman. “That passion led us to embark on our most ambitious design and engineering effort ever, and the result is nothing short of the ultimate GoPro—the HERO4 Black. We can’t wait to see what the world captures with it.” 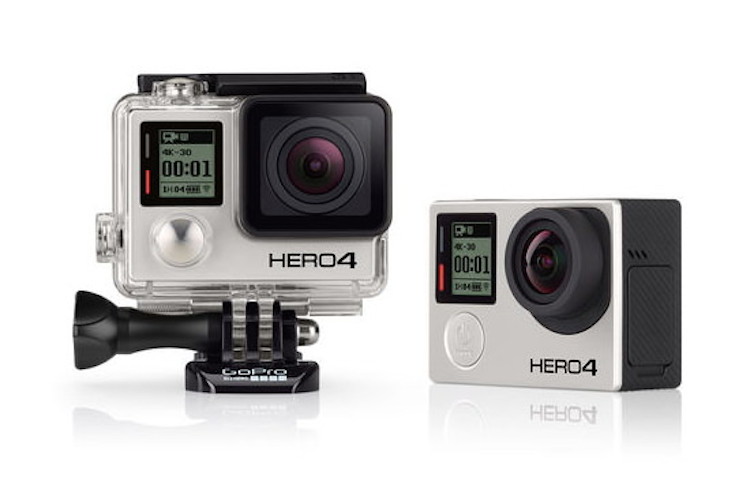 The flagship HERO4 Black builds upon GoPro’s Emmy® Award-winning technology to deliver the next level of GoPro image quality, versatility and performance:

“A common pain-point is deciding between capturing video or photos of an experience,” remarked Woodman. “Each frame of4K30 video is similar to an 8.3 megapixel photo. The result is that users can simultaneously capture eye-popping 4K30 video and impressive 8.3 megapixel photo-like video stills at 30 frames per second when using HERO4 Black. It’s one of the many wild capabilities of this impressive new device.” 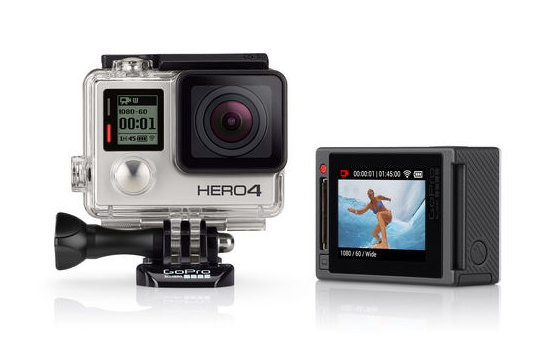 The most advanced GoPro cameras yet.

For those who prefer to take manual control of their GoPro to maximize versatility and performance, we’ve expanded our professionally minded Protune mode to include Color, Sharpness, ISO Limit, and Exposure controls for both photo and video capture.

New settings for after dark.

Whether you’re shooting the Milky Way or a campfire hangout, Night Photo and Night Lapse allow you to capture stunning images of ultra low-light scenes with customizable exposure settings of up to 30 seconds.

HiLight Tag enables you to mark key moments with the push of an on-camera button while recording, making it easy to find, playback and share your favorite clips in GoPro Studio or with the GoPro App. You can also HiLight Tag using the mobile GoPro App or the new Smart Remote accessory.

QuikCapture makes it easy to power on and record with the press of a single button. When enabled, a single press starts video capture, while a press and hold engages Time Lapse photo capture.

GoPro is also proud to debut HERO, the perfect entry-level GoPro. Designed with simplicity in mind and built directly into a rugged, waterproof housing, HERO captures high-quality 1080p video at 30fps and 720p video at 60fps. HERO captures the same immersive, eye-popping footage that’s made GoPro one of the best-selling cameras in the world—all in a simplified package that’s accessible to everyone with an MSRP of $129. For more information visit the HERO product page on GoPro.com.

October 5th also marks the availability of these new GoPro mounts and accessories:

Smart Remote – Control your GoPro from up to 600’ (183m) away with the wearable and waterproof remote. Conveniently mark key moments as they happen with the Smart Remote’s HiLight Tag button when paired with a HERO4 Black or HERO4 Silver.

The Handler – A compact floating handgrip. Lightweight, ergonomic and durable, The Handler is perfect for handheld shooting during any activity.

GoPro Studio makes it easy to import GoPro footage from your camera to your computer to create professional-quality videos. GoPro Studio features GoPro Edit Templates, template versions of some of GoPro’s most popular videos. All you have to do is replace the original GoPro video clips with your own favorite clips and the editing style that has made GoPro famous becomes your own. GoPro Studio now supports the HERO4’s HiLight Tag feature, making it easy for GoPro Studio to identify your videos’ best moments thereby allowing for faster and more convenient editing. Also new to GoPro Studio is Flux™, a powerful ultra slow motion and speed ramping tool that enables the dramatic time-shifting effects GoPro has become so well known for. Want to highlight a particularly awesome moment in one of your edits? Flux that thing and share it with the world.

The GoPro App for mobile not only gives you instant access to the GoPro Channel and all of the incredible content that has made it the number one brand channel on YouTube, it also gives you full control of HERO4 Black and Silver and allows for quick and easy changes to any mode or setting. Expanded GoPro App support for HERO4 also includes support for HiLight Tagging while recording, as well as searching for tags during playback. As always, the GoPro App also allows for shot preview, playback and sharing of your favorite photos and videos via email, text, Facebook, Twitter and more.

GoPro is committed to inventing innovative tools that make it easy for people to self-capture and share engaging and immersive experiences with others.

Learn more about HERO4 line and the entire GoPro ecosystem of software and accessories at GoPro.com, or visit your local retailer today.