The new Casio Exilim EX-FR10 “split camera” has a physical shutter release on the main camera body but can also be operated remotely via its detachable, Bluetooth-enabled wireless controller.

Casio EX-FR10 specifications include a 14-megapixel, 1/2.3″-type CMOS sensor, 21mm (eq.) f/2.8 lens and a 2″, 230,400-dot screen. Images captured with the Exilim EX-FR10 are recorded on microSD memory cards, and can be sent effortlessly to a smartphone or tablet via Wi-Fi. Casio has confirmed that both the camera body and the controller are splashproof, dustproof, and shockproof.

The camera will be available in Japan in three different colours; orange, white and green. The Casio EXILIM EX-FR10will be priced at 50,000 yen (about $500). 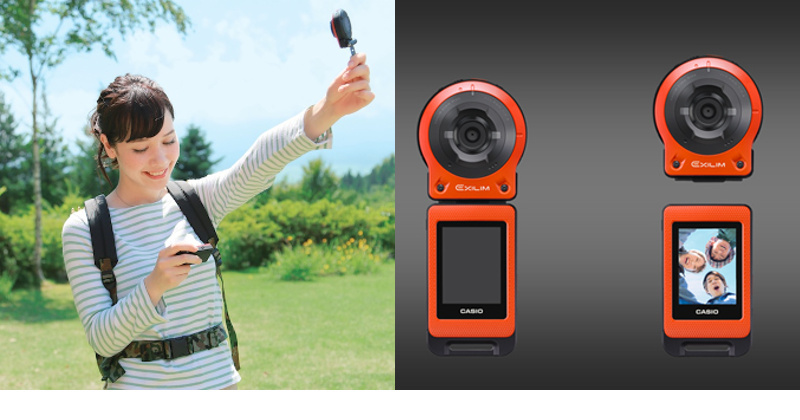 ♦ Detach and dock at the press of a button

Although the camera is made up of two separate units—the camera unit and controller—Casio designed it to look like a single unit. Nevertheless, the camera unit can be detached and docked at the press of a button.

Split style
With one of several attachments, users can easily fix the camera anywhere they like and then shoot remotely with the controller. Casio has equipped the camera with an interval shooting function for enabling hands-free shooting of photos or videos. Users can also take shots without the controller by using the shutter button on the camera unit.

· Self-portrait style
Dock the camera unit to take effortless self-portraits with the lens and LCD facing in the same direction and the camera held upright.

Take self-portraits or group shots—all with one camera 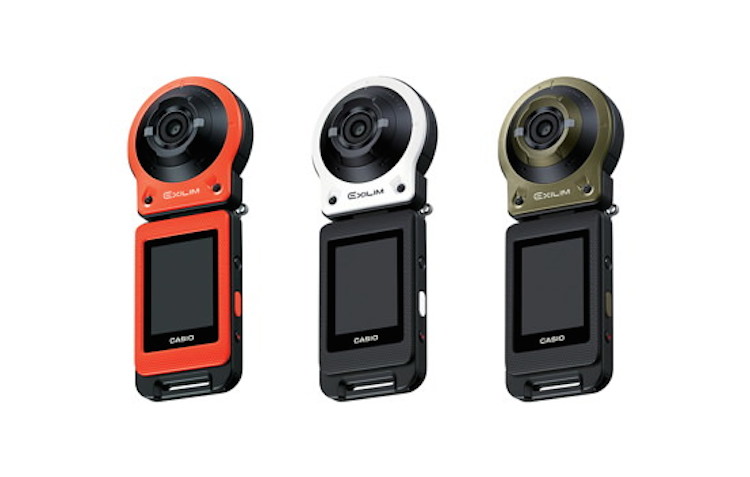 ♦ Self-portraits
By setting up the camera for self-portrait style shooting and using the Make-up mode, the user can enhance his or her appearance.

♦ Group shots
By detaching the camera unit and setting it to face the subject, the user can take group shots including him or herself using the controller.

Shoot in a variety of situations

When the controller is detached, the user can simply prop the camera unit up on its hinge. Users can shoot a wide range of situations using the strap that comes with the camera and attachments that can easily be fitted and removed.

♦ Straps and nut
The camera comes with the Neck Strap for comfortably wearing the camera unit or controller around the neck, and the Carabiner Strap for clipping the controller to a convenient place. The Tripod Nut attaches to commercially-available tripods.

Have Fun Sharing Photos and Movies

With the Highlight Photo function, users can produce a single image of a day’s highlights just by specifying the shooting date and layout. The camera automatically selects recommended still images and saves them as a single photo collage. Users can choose from 10 different options featuring with different photo sizes, placement, and total number in the collage. Automatically selected photos can be changed with an easy operation, and favorite photos can be given priority.

With the Highlight Movie function, users can produce a single short video of a day’s shooting, complete with automatically added video effects, just by specifying the shooting date. The camera automatically selects recommended video clips and still images. Users can choose from four types of background music, and specify three different lengths of the video to suit the situation.