Sony and the World Photo Organisation has announced the grand winners of the 2014 World Photography Awards competition in London, UK.

Thirty-one year-old American photographer Sara Naomi Lewkowicz has been announced as the winner of the 2014 L’Iris d’Or, Sony World Photography Awards Photographer of the Year.

Additionally, Sony and the WPO have revealed the grand winners of the Open, Youth, and Student categories. 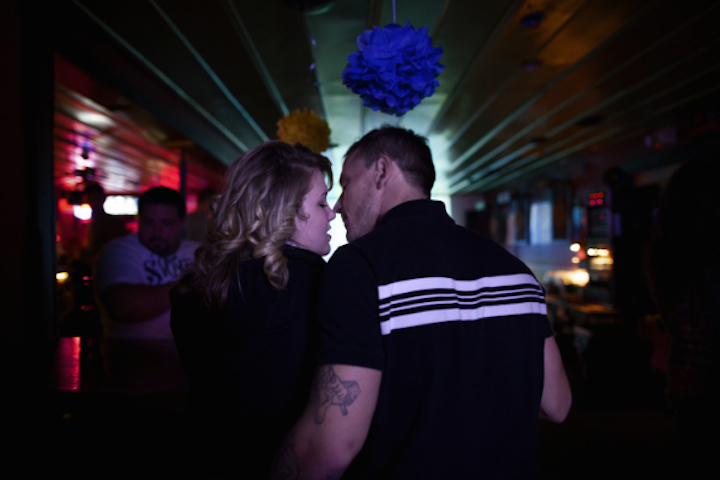 The judges voted unanimously for Lewkowicz’s hard-hitting series, ‘Shane and Maggie’, – an intimate examination of domestic violence as a process – as this year’s winner. Through her project, Lewkowicz seeks to take a deeper, unflinching look at domestic abuse as a process as opposed to a single incident. She examines how a pattern of abuse develops and eventually crests, as well as its short and long-term after-effects on victims, their families, and their abusers. The story is inescapable; horrific and tender, fierce and unfathomable, luridly colored.

Talking about her win, Lewkowicz comments: “I’m completely stunned; there was such extraordinarily strong work, I figured there was no way I would win – I was just excited to receive one award! I am completely overwhelmed’.

Sara Lewkowicz is a native New Yorker pursuing a master’s degree in visual communication from Ohio University in Athens. She received her bachelor’s degree in journalism from the University of North Carolina. Her work has been published in publications such as Time Magazine, Stern and Days Japan. She has won several grants and awards, including the 2013 Alexia Student Grant, first place in the Contemporary Issues Category for World Press Photo and the 2013 Ville de Perpignan Remi Ochlik Award. She has been named the 2013 College Photographer of the Year by COPY and other awards and honours include POYi, Days Japan, the World Report Award by Festival for Ethical Photography in Italy and numerous others.

Chosen by our esteemed Honorary Judging Committee, the L’Iris d’Or – our most distinguished award – is presented to one single photographer whose work represents the pinnacle of the entries received. The photographer is chosen from within the first place winner of all the professional categories. The L’Iris d’Or winning series of work, alongside those of the other winners announced tonight at the awards, will be displayed as part of the 2014 Sony World Photography Awards Exhibition at Somerset House from 1 – 18 May. The images will also be published in the 2014 edition of the Sony World Photography Awards book.

The winners, plus the 2nd and 3rd placed photographers of the Professional competition, were also revealed at the awards ceremony. The Professional winners were flown to London to collect their award.

The wining series of works showcase the very best in international contemporary photography – from still life and architectural images forcing the viewer to find something surprising within the everyday – to witty images of wet dogs. The winners are:

Mary Ellen Mark is recognised as one of the world’s most influential photographers, and her work has become the benchmark for excellence in the field of documentary photography.

Starting off as a freelance photographer, often working on film sets, Mark’s career has spanned four decades and seen her travel extensively. Her work is characterised by a constant vision to make pictures that reflect a high degree of humanism and to capture and acknowledge people on the edges of society.

To mark the award, a special retrospective of Mark’s work will be shown at Somerset House from 1-18 May as part of the 2014 Sony World Photography Awards Exhibition. A further selection of images will be published in the 2014 edition of the Sony World Photography Awards winners’ book. The Outstanding Contribution Award has previously been awarded to William Eggleston, William Klein, Eve Arnold, Bruce Davidson, Marc Riboud and Phil Stern.

British photographer Scarlet Evans, who competed for the Student Focus Photographer of the Year title on behalf of her university, Central Saint Martins College of Art and Design, UK, was announced as the winner and presented with €35,000 worth of Sony digital imaging equipment for her university. The Student Focus Award is one of the largest international programmes for photography students. Involving 230 educational institutions worldwide, its aim is to support and inspire the future generation of photographers.

A stunning image of a young girl on a night train in China secured nineteen year-old Paulina Metzscher the title of Youth Photographer of the Year. Metzscher’s image was chosen as the single best photograph taken by a photographer under the age of 20.

The Kraszna-Krausz Book Awards are a proud partner of the Sony World Photography Awards. Two stunning books share the awards’ £10,000 prize for the best photography and best moving image books of the year. This year’s winners are:

The Kraszna-Krausz Foundation also presented Philippa Brewster, Senior Editor, Visual Culture at I.B. Tauris, with the Outstanding Contribution to Publishing Award in recognition of her long-standing dedication to, and impact on, the visual publishing industry.

Galleries of all the winning and finalist images can be seen at www.worldphoto.org