More reviews and test results for the Sony A7 full frame mirrorless camera is now available. DxOMark has posted a review for the Sony A7 and tested the sensor performance of the camera.

The Sony A7 achieves a DxOMark score of 90 points and placed in 9th place in overall ranking. The A7 full frame mirrorless camera is just behind the medium format Phase One IQ180 at 91 points and just above the full-frame Nikon D4, which scored 89 points. 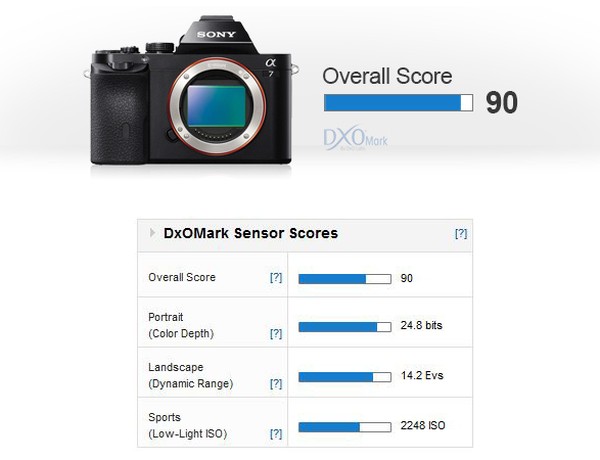 Sony A7 sensor performance and test results also contain a comparison between the Sony A7 vs. Nikon D610 vs. Sony SLT-A99. See below for the details and conclusion. 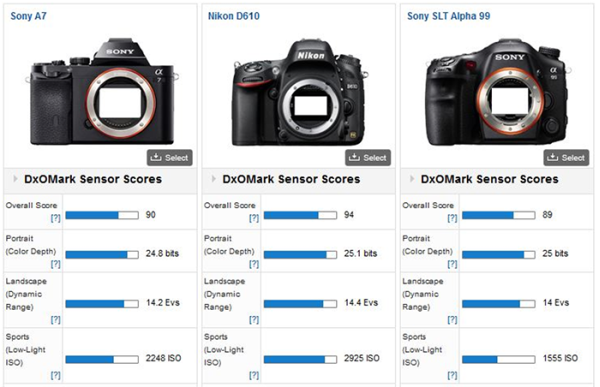 Unsurprisingly perhaps, compared with the Nikon D610 and the firm’s SLT A99, both using a similar full-frame 24-Mpix CMOS sensor, the results are very close. Color depth between the three is similar and the A7 sits between the two with regard to the dynamic range, just +0.2 Ev separates the Nikon. However, it’s the low light performance that divides the two Sony models. While the A7 has a + ½ stop advantage over the SLT-based A99, the Nikon has a +1/3 stop over the A7, presumably on account of the latter model’s modified sensor.

The PhotographyBlog also posted their full review for the Sony A7 camera. They say:

After shooting with both the A7 and the A7R side-by-side, we’d be hard-pushed to choose between them, as both are remarkable cameras in their own right. On paper at least the A7 should offer faster auto-focusing and less noise at high ISOs than the A7R, but in reality there’s not a big enough difference between the two cameras in either regard. Instead we’d choose the A7 instead of the A7R because it’s significantly cheaper, it produces more manageable file sizes, has a higher flash sync speed, slightly faster burst shooting and a quieter shutter release.