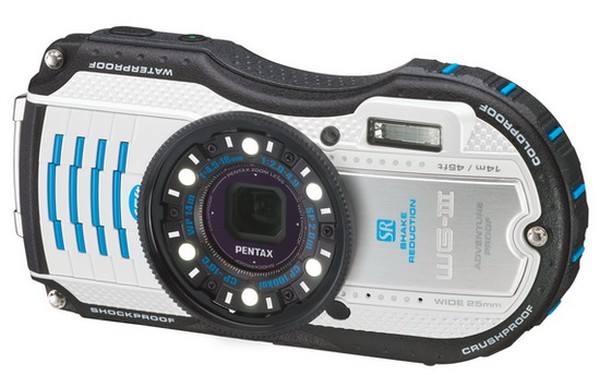 Denver, CO (June 3, 2013) — PENTAX RICOH IMAGING AMERICAS CORPORATION today announced the addition of a white WG-3 to its ruggedized lineup of compact cameras which launched in March 2013. The WG-3 line of cameras is now available in five colors including the new white, black and orange or in green or purple in the GPS version. The WG-3 and WG-3 GPS line of cameras offer worry-free shooting for active families and adventurous individuals. Pulling from long standing expertise in the rugged camera category, PENTAX upgraded the features on this new and improved line of waterproof cameras, now in its 15th generation.

Included in these upgrades are a feature-set that has been optimized to meet the rigorous and demanding needs of the adventurous photo enthusiast, whose travels and exploits can take them into a variety of scenarios too challenging for the traditional point-and-shoot.

For the unplanned adventure, the WG-3 offers a worry-free shooting experience with an increasingly ruggedized body that is shockproof from drops of up to 6.6 feet, coldproof to 14 degrees Fahrenheit and crushproof, waterproof to 45 feet, and can withstand up to 220 foot pounds of force. The WG-3’s rugged design is enhanced by its folded optical zoom lens that reduces its vulnerability to moisture and dust while ensuring a compact and pocketable size without the protrusion of a lens barrel. Finally, the sturdy construction and sharp design, unique to the WG-3, features a texturized grip for a controlled ergonomic grasp and colorful grip accents to further enrich its rugged styling.

“The addition of white to the existing line of WG-3 cameras is a timely inclusion for upcoming summer activities,” said John Carlson, Sr. Marketing Manager, PENTAX. “The WG-3 is a great, worry-free camera to keep with you for a day at the beach, a long hike or even on the slopes in the winter. Regardless of season, climate or weather the WG-3 was built to withstand the elements and capture great images.”

The white WG-3 rugged compact camera will be available in July 2013 for $299.95 at www.pentaxwebstore.com  and with limited distribution to retail outlets.