HP has announced HP Live Photo service and iOS app. “Experienced directly through an iPhone, the HP Live Photo app allows users to create, view and share images using augmented reality powered by Aurasma, an HP Company,”  HP Live Photos can be shared by email, Facebook or by printing to any AirPrint-enabled printer. The app is currently available in the US for iOS 5.1 devices. It is expected to be available later this year for other mobile operating systems. 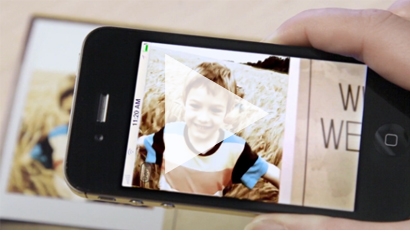 Users simply download the free app from the App Store, choose a video (45 seconds or shorter) from their camera, select an automatically generated still image, add a fun template, then print and share it.

“Augmented reality is the new medium for bringing the physical world to digital life and HP Live Photo puts the power of this technology into the hands of everyday consumers,” said Annie Weinberger, general manager, Aurasma, an HP Company. “Not only does HP Live Photo heighten the intrigue and surprise of receiving a printed greeting card, but for the first time mobile videos live on beyond the digital world making them truly part of the physical world as well.”

HP Live Photos can be shared by email, Facebook or by printing to any AirPrint-enabled printer1. Every HP Live Photo will include a blue origami icon designating it as a HP Live Photo.

Pricing and availability
HP Live Photo is available in the United States for iOS 5.1 devices2. It is expected to be available later this year for other mobile operating systems.

Additional information about HP Live Photo is available at http://www.hp.com/go/livephoto.

About HP
HP creates new possibilities for technology to have a meaningful impact on people, businesses, governments and society. The world’s largest technology company, HP brings together a portfolio that spans printing, personal computing, software, services and IT infrastructure to solve customer problems. More information about HP (NYSE: HPQ) is available at http://www.hp.com.

1. Supports the following devices running iOS 4.2 or later: iPad, iPhone (3GS or later), iPod touch (3rd generation or later). Works with HP’s AirPrint-enabled printers and requires the printer be connected to the same network as your iOS device. Wireless performance is dependent upon physical environment and distance from the access point.

2. Supports iOS 5.1 and later, iPhone 4, 4S, 5 and the iPad (in 2X view). Use of app requires internet connection and Facebook account/registration. Separately purchased data plans or usage fees may apply. Facebook recipient is required to have the app to view photos. Wireless performance is dependent upon physical environment and distance from access point. Printer must be Airprint- and web-enabled. Print times and connection speeds may vary.

AirPrint, the AirPrint Logo, iPad, iPhone, and iPod touch are trademarks of Apple Inc., registered in the U.S. and other countries.

This news release contains forward-looking statements that involve risks, uncertainties and assumptions. If such risks or uncertainties materialize or such assumptions prove incorrect, the results of HP and its consolidated subsidiaries could differ materially from those expressed or implied by such forward-looking statements and assumptions. All statements other than statements of historical fact are statements that could be deemed forward-looking statements, including but not limited to statements of the plans, strategies and objectives of management for future operations; any statements concerning expected development, performance, market share or competitive performance relating to products and services; any statements regarding anticipated operational and financial results; any statements of expectation or belief; and any statements of assumptions underlying any of the foregoing. Risks, uncertainties and assumptions include macroeconomic and geopolitical trends and events; the competitive pressures faced by HP’s businesses; the development and transition of new products and services and the enhancement of existing products and services to meet customer needs and respond to emerging technological trends; the execution and performance of contracts by HP and its customers, suppliers and partners; the protection of HP’s intellectual property assets, including intellectual property licensed from third parties; integration and other risks associated with business combination and investment transactions; the hiring and retention of key employees; assumptions related to pension and other post-retirement costs and retirement programs; the execution, timing and results of restructuring plans, including estimates and assumptions related to the cost and the anticipated benefits of implementing those plans; the resolution of pending investigations, claims and disputes; and other risks that are described in HP’s filings with the Securities and Exchange Commission, including HP’s Annual Report on Form 10-K for the fiscal year ended October 31, 2012. HP assumes no obligation and does not intend to update these forward-looking statements.