Nikon will launch a new service on January 28, 2013. Previously known as myPicturetown, this new online image sharing and storage website is called “Nikon Image Space“. It is going to be a free service and you will get  2GB of free storage, improved usability, greater performance and collaboration with social networking sites. Also all the myPicturetown accounts will be automatically transferred to the new Nikon Image Space. Nikon Image Space is open to everyone, no matter what camera they own.

More intuitive and easier to use, Nikon’s image sharing and storage service is reborn as “NIKON IMAGE SPACE” 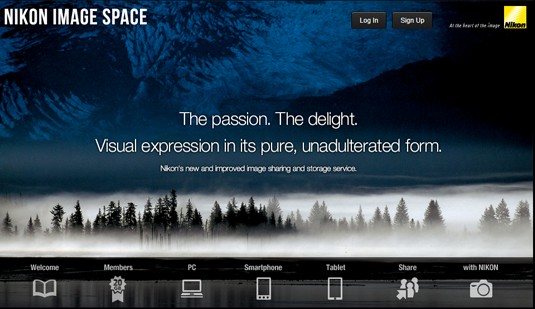 “NIKON IMAGE SPACE” is a free online service for sharing images open not only to users of Nikon digital cameras, but anyone who enjoys taking photos or recording movies.

This service makes it easy for camera enthusiasts to upload, view, organize, and share their photos and movies of once-in-a-lifetime moments with greater convenience through sequential operation, which is achieved by high speed operation of the system, an intuitive user interface (UI), a clear window layout, and a simple operation flow.

Nikon has offered its image sharing and storage service, my Picturetown, since August 2007. my Picturetown has been used by a great many people in the world either for free of charge or for a fee with some special privileges. However, with a complete overhaul of the service, we are taking this opportunity to change the name from my Picturetown to “NIKON IMAGE SPACE.”*

Nikon will continue to offer users ways to enjoy their digital images through “NIKON IMAGE SPACE”.

Further information on “NIKON IMAGE SPACE” will be presented at the Nikon Imaging Japan booth at the CP+ 2013 camera and photo imaging show to be held January 31–February 3, 2013 at the Pacifico Yokohama (Yokohama, Kanagawa Prefecture, Japan).