According to the Sony FE 50mm f/2.8 Macro lens test results, it has scored a point of 41 in their database. Test performed by using the Sony A7RII full-frame E-mount camera.

Even they find the lens expensive, it has well controlled chromatic aberration as well as lightweight and portable. On the other hand it has became the third-sharpest lens tested on Sony a7R Mark II. If you are wondering, the first two lenses are FE 90mm f/2.8 Macro and the Carl Zeiss Sonnar T* 55mm f/1.8. Actually this macro is much cheaper than these two performers.

See DxOMark conclusion below for this  general-use photography and portraiture optic. 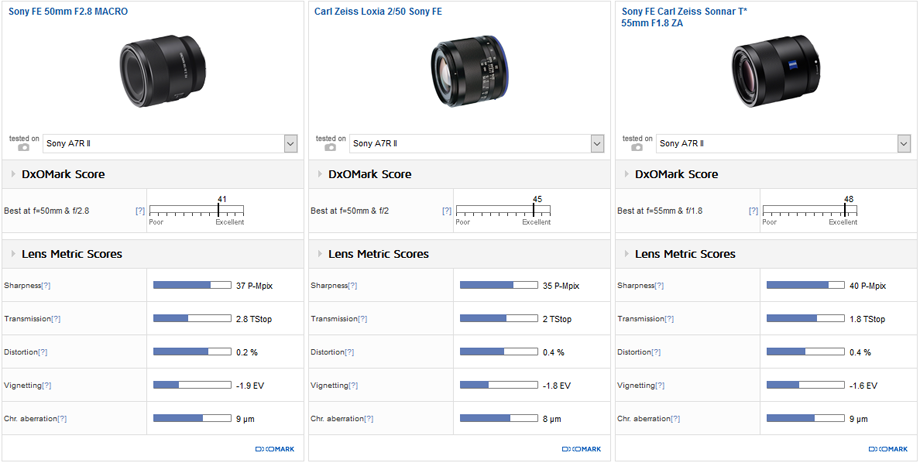 Shooting full-frame, a 50mm prime is a really handy option for general use and portrait photography, as well as a relatively lightweight and portable lens. Adding 1:1 macro focusing, the Sony FE 50mm f/2.8 Macro offers greater functionality for Sony A7 series owners. Making it an even more versatile optic at a sensible $499 price point. Sharpness is outstanding on the Sony A7R II, achieving 37 P-Mpix of the Sony A7R II’s total 42Mp resolution. It’s the third-sharpest lens we’ve tested on this camera. It’s not as sharp as the Zeiss Sonnar T* 55mm f/1.8 and lets in half the amount of light using the maximum aperture, but it’s also half the cost of the $998 Zeiss and offers macro.