Here is our Git 2 Gitup action camera review. When first receiving and unboxing the Git 2 Gitup, i was expecting a classic on the go action camera with standard features when compared to its price range.

Actually it was surprising to see that when you purchase the Git 2 camera you also get several units probably you will need for every feature of action use.

At first glance this action camera comes with a lot of accessories and it doesn’t lack anything. You get a matchbox sized camera which fits your budget.

So let’s get started with the box you get, accessories and the general specifications of the Git 2 Gitup camera. 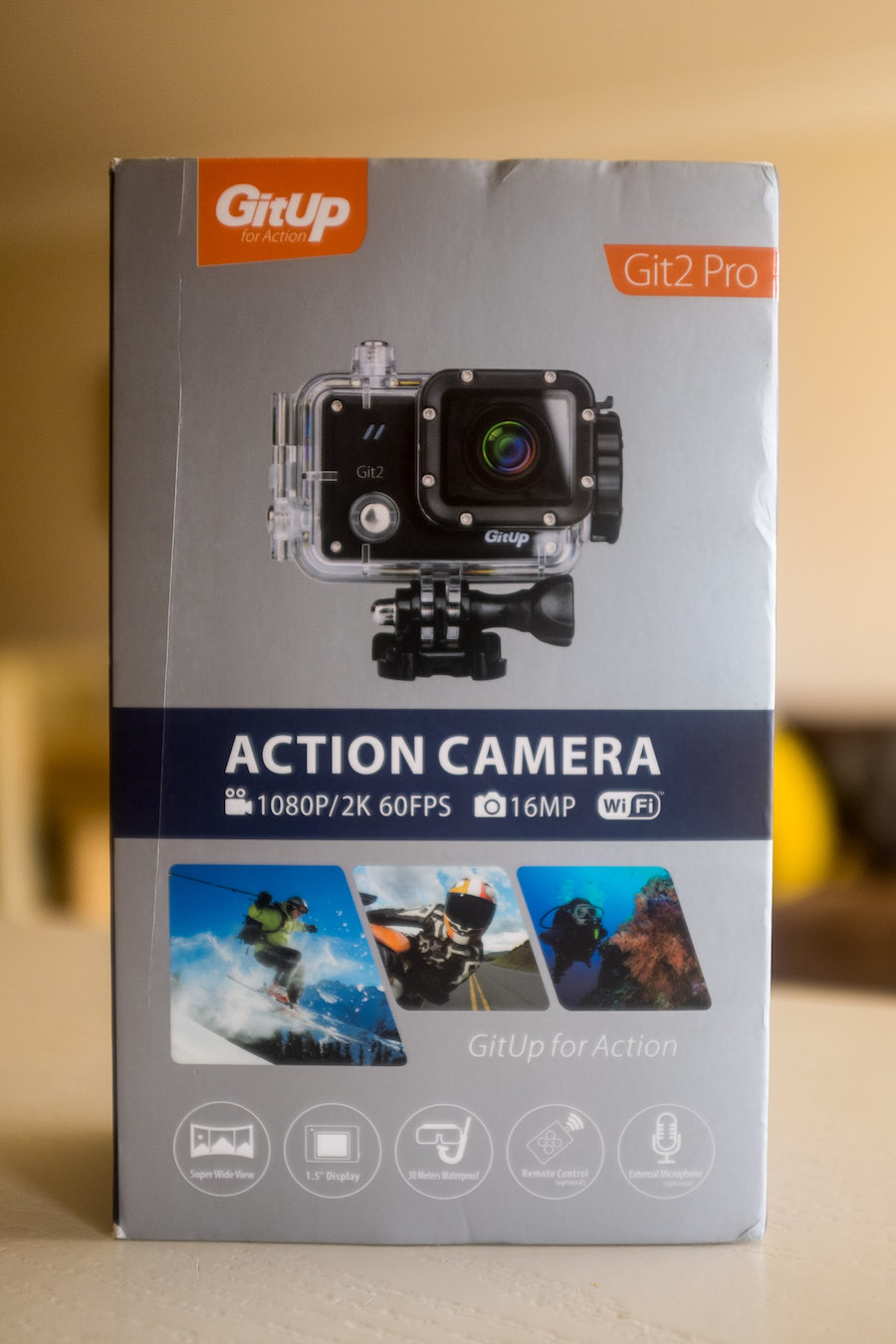 GIT2 comes in two different version. There is a standard and a pro model for users choice. If you are asking about the difference between the standard and pro models. I can say it is only the accessories that comes with the camera. The most important addition is the waterproof case in my opinion besides the mounts and holders. Because this kind of additional accessories are always optional for every user but for an action camera a high percentage of users may need a waterproof case. 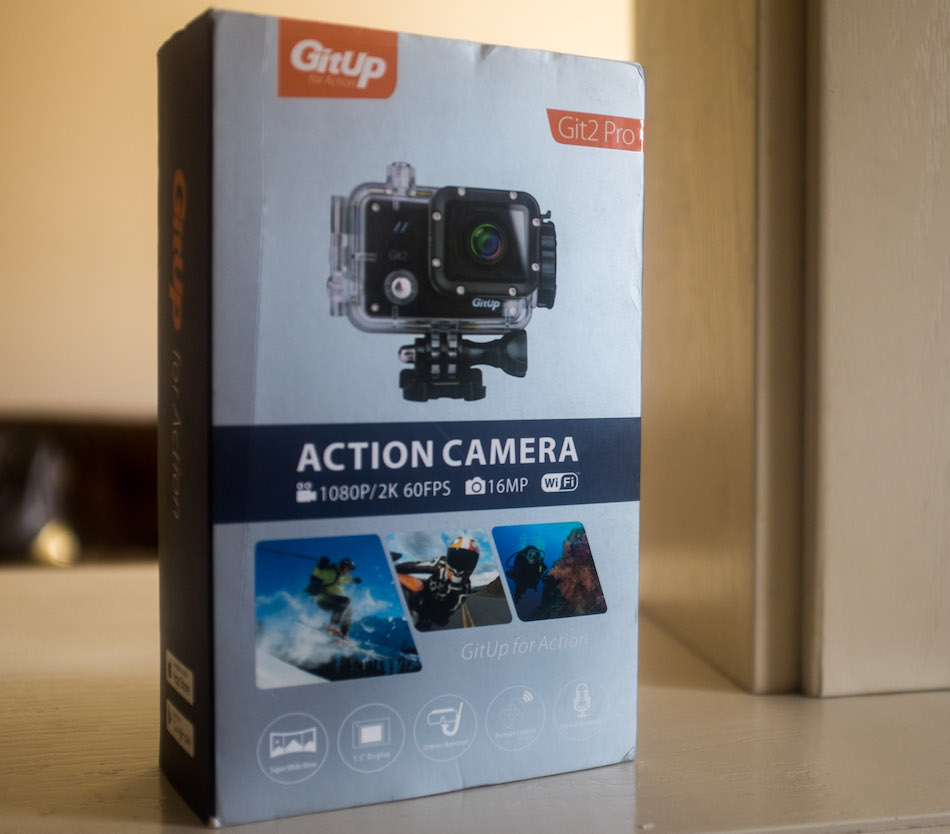 Most of the accessories can be bought separately. Along with the camera, lens cover, USB cable, battery and quick start guide in standard version you get waterproof housing, bike/handlebar mount, holder, flat adhesive mount, curved adhesive mount, 2x connector, 2x screw, adapter and tripod mount in pro model. I recommend for new buyers to go with the pro version.

Here are all the accessories when i unbox the Git 2 Gitup camera. 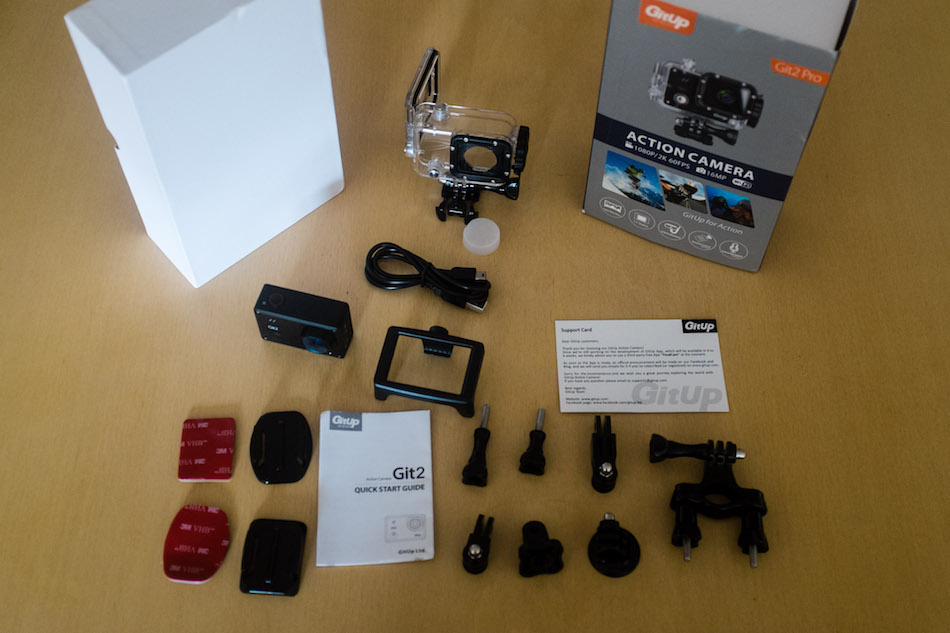 Git 2 is a minimalist matchbox sized camera. Comes in only black color option it’s well built and tough. Even it is an affordable action camera, when you hold it, you can feel the overall quality in the design.

It has a 1.5-inch LCD screen on the back. The best thing is you can preview your video records in real time with the LCD display. The design has less buttons overall. This is good and makes the product minimalist and usable in terms of functionality. You can operate the camera from the right side with simple button pressings.

They put all the ports together. On the side you can find the HDMI and USB ports with memory card slot all in one place. 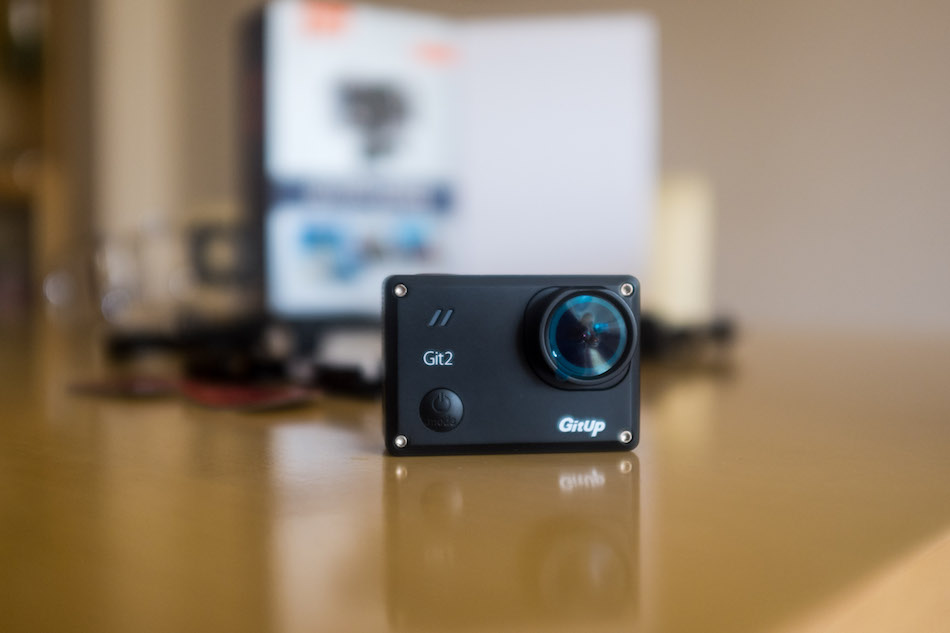 Weighing only 64 grams, Git 2 is a light-weight action camera.

Git 2 Gitup camera is very easy to use. To operate the camera is simple and a piece of cake. It has four main modes. Video mode, Photo mode, Playback mode and the System settings for changing camera settings.

The highest resolution you’ll get from the Git 2 camera in terms of video quality is the 24fps at 2880×2160. At first glance i find the videos from Git 2 provides nice colors and the overall color rendering were in good quality. This camera is not capable of recording 4K videos. UHD 4K resolution is 3840 × 2160 and the maximum you will get with the Git 2 camera is the 2880 x 2160.

In video mode you have loop recording with intervals between 2, 3, 5, and 10 minutes. Beware that GIT2 starts overlapping the first recorded video when the memory card gets full.

The specs list include gyro stabilization which is similar to image stabilization feature in digital cameras. The camera has built-in time lapse video recording and slow motion. The action shooter has several white balance options but i generally use “Auto” for WB.

Even this is an action camera and it is intended for video shooting, you can take still photographs with the Git 2 Gitup. The camera features IMX206 sensor which provides still images at 16-megapixel resolution.

For shooting photographs you can switch from video mode to photo mode by pressing the “Mode Button”. When the camera LED light turns GREEN you can understand that you are in photo mode.

I like how the camera renders colors. They are sharp enough for this kind of action camera. Git 2 Gitup provides natural colors  and you can always post-process your images after shooting.

It can shoot 16-megapixel still images but i prefer 12-megapixel stills in 16:9 format. The shutter speed of the camera ranges from 1/30 to 1 minute. Means that you can take long exposure photos up to 1 minute of time. 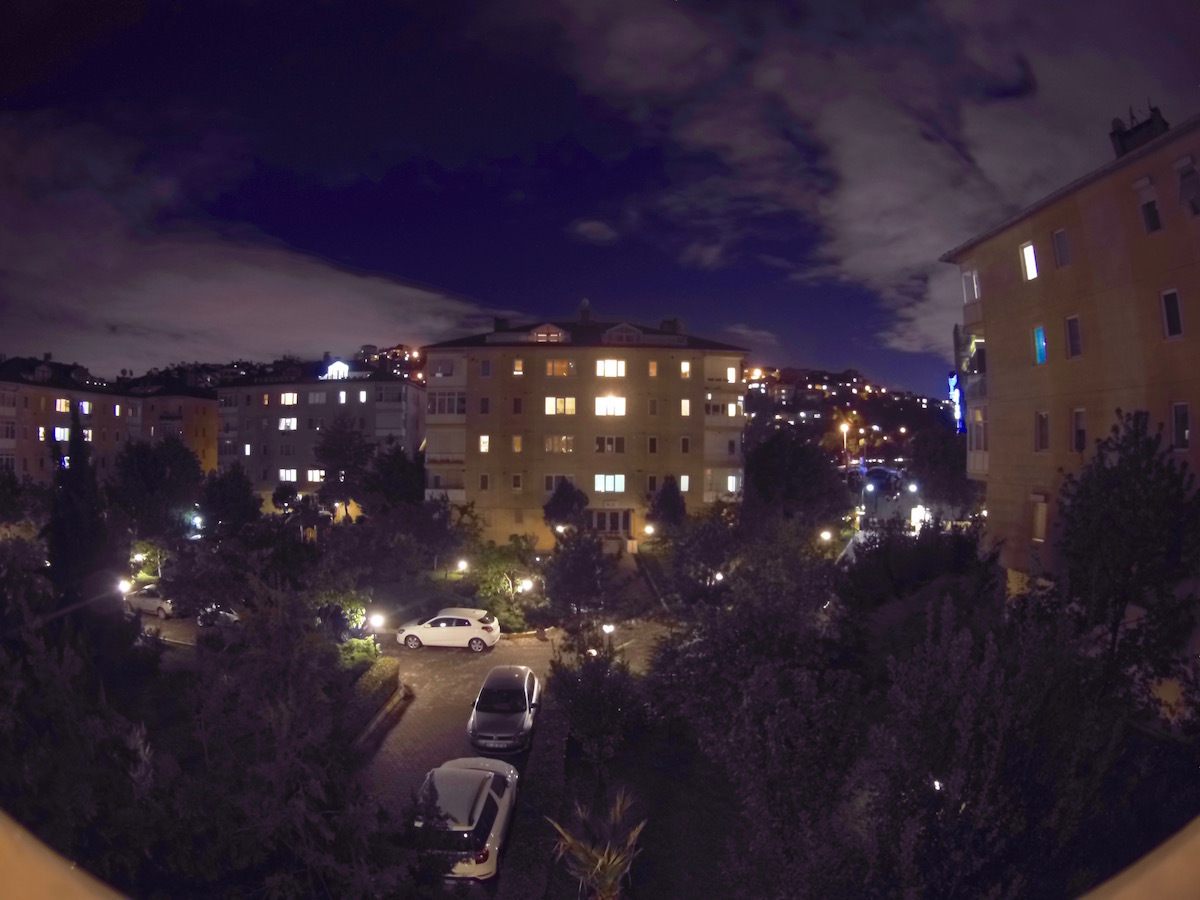 The camera has self timer and capture modes. To explain the capture mode, the camera captures several image in a single shutter. Git 2 Gitup can take 3 to 10 photos continuously.

It’s a good thing to preview what you record or shoot. GIT2 has a playback mode which you can preview your footage. You can also delete the media you don’t like from the settings menu while on Playback mode.

The only thing i didn’t like is that camera records audio but doesn’t play back when you preview the video. No sound during video preview. You have to open the video from the PC and the audio is there.

Update : They fix the audio issue while playback on TV via HDMI. See firmware update. 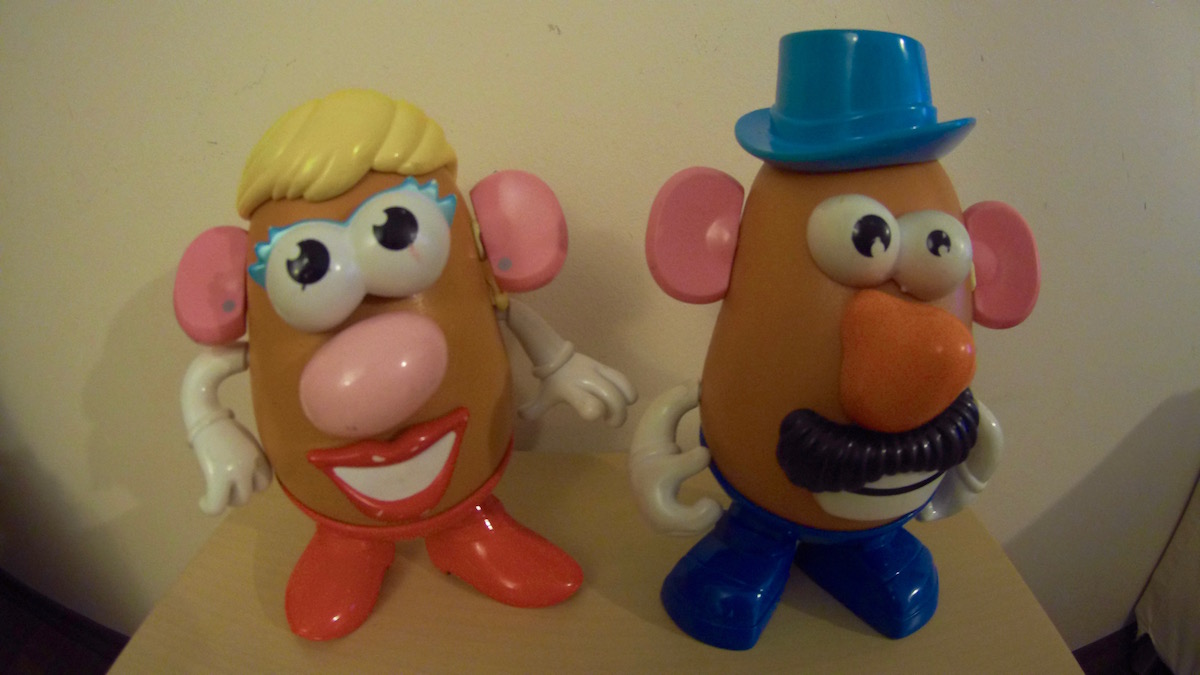 Git 2 has a waterproof case that allows up to 30m underwater usage. It is available in pro packing or can be bought separately. The buttons on the case are well built and easy to press.

In my opinion the action camera has a good battery life. Keep in mind that when you turn gyro stabilization off you save more battery for other actions. So think about the stabilization. If it’s not important for you then turn it off. For battery life i can say the Git 2 can shoot around 100 minutes of time. But again it’s about the chosen resolution and the frame rate.

You can charge your camera by using the USB cable and connect it to a PC. When connected, you will see Mass Storage or PC Camera selections. As a standard choice when you select “Mass Storage” the camera will start charging.

It was fun to play with Git 2 Gitup camera. It is easy to operate and navigate the menus and its functionality. A well-built action camera with external microphone support, Wifi and LCD display for preview your footage. Compatible with all GoPro accessories, Git 2 Gitup camera provides very nice colors in both video and photo shoots.

If you are looking for a matchbox sized camera and the Git2 is an affordable budget-friendly action model. I really can’t think of anything that should prevent you from buying it.

How to buy Git 2 Gitup camera?